104: An Introduction to Historical Revisionism

In the following text you will find the questions which are most frequently asked about Holocaust Revisionism. You will find my answers by simply clicking on the question. I also have a leaflet for free download which summarizes Holocaust Revisionism in a nutshell. This is the good flyer for a brief introduction and as a handout to others. I wish you a lot of worthwhile discoveries while browsing through the following page.

If you have further questions, please do not hesitate to ask.

8. What about those pictures of mountains of dead bodies in the concentration camps?

Here is a photograph of victims of the typhus epidemic in a mass grave on the concentration camp in Bergen-Belsen, taken by the British Army: 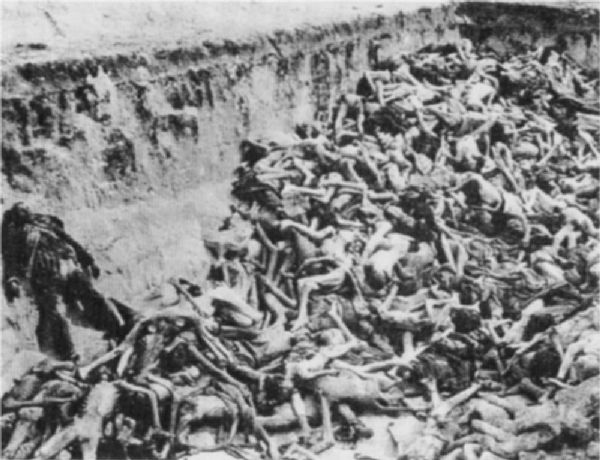 Photograph of victims of the typhus epidemic in a mass grave on the concentration camp in Bergen-Belsen, taken by the British Army.

This photo is typical of a large number of such photos often shown on TV Holocaust documentaries either without commentary or else with allegations that the dead are victims of the Holocaust. In fact, it is a photograph of victims of an epidemic which occurred at war’s end. The cause of death is evident from the condition of the corpses. If they had been gassed they would not be emaciated and if they had died of starvation they would have swollen joints and stomachs. Any medical professional will see at first glance that these people died of typhus.

All photographs of heaps of corpses were taken in Western camps around the end of the war, such as Dachau, Bergen-Belsen, and Buchenwald, where historians now agree no mass murders took place. Significantly, there are no such photographs taken at the camps in which mass murder is alleged to have occurred (Auschwitz, Treblinka, Belzec, Sobibor, Chelmno, Majdanek.) These eastern camps were all in areas which came under Soviet control at war’s end. It is very telling that the Soviets released no pictures of mass graves or heaps of corpses and allowed no journalists, medical professionals, or other experts to examine the camps. Since the end of the 1980s, Revisionists have been investigating these sites for evidence of mass murder, but the officials have obstructed their efforts by all possible means.

In the absence of authentic photographs documenting mass murder, it frequently happens that photographs of those who died in the Western camps at war’s end of malnutrition and typhus are presented as evidence of deliberate mass murder. To be sure, the hellish conditions in the Western camps at war’s end convinced many Allied observers that mass murder had taken place, as initial reports indicate. In reality, these conditions resulted from a situation for which the German government was not solely responsible. Toward the end of the war, Himmler illogically ordered the evacuation of the eastern camps as the Red Army approached, which led to hopeless overcrowding in the western camps. By that time, Allied bombing had completely destroyed the German infrastructure, making it impossible to supply the camps with food, medicines, and sanitation supplies. Misunderstandings about the causes of the massive die-off continue to this day, especially among Americans.

The respected leftist historian Norbert Frei has given the following reason for misinterpretation, (from Vierteljahrshefte für Zeitgeschichte 35 (1987) page 400):

“The shock of these discoveries [of mountains of corpses] often led to false conclusions which turned out to be enduring.”

There is no denying that a government which imprisons people in camps is responsible for them and so the unjustly imprisoned were therefore victims of the Third Reich, even if they died “only” of disease. However, one should not overlook the fact that by the war’s end, mountains of corpses had become commonplace throughout Germany. In German cities there were 600,000 victims of Allied terror bombings. Millions more died of starvation and disease, which continued rampant through 1949. In Eastern Europe some two million Germans were murdered by Serbs, Czechs, Poles, and Russians in the course of history’s bloodiest ethnic cleansing. In the POW camps of the western Allies, a million young German men died and millions more vegetated. Hundreds of thousands more were shipped to the labor camps of the Soviet GULag never to be seen again. But the media show only one variety of corpse piles, those in the concentration camps. We should all ask ourselves why this is so. (For more on the misinterpretation of conditions in German camps at war’s end see: (1) (2)).

Should the dignity and respect, which we owe the victims of atrocities, depend on their nationality?