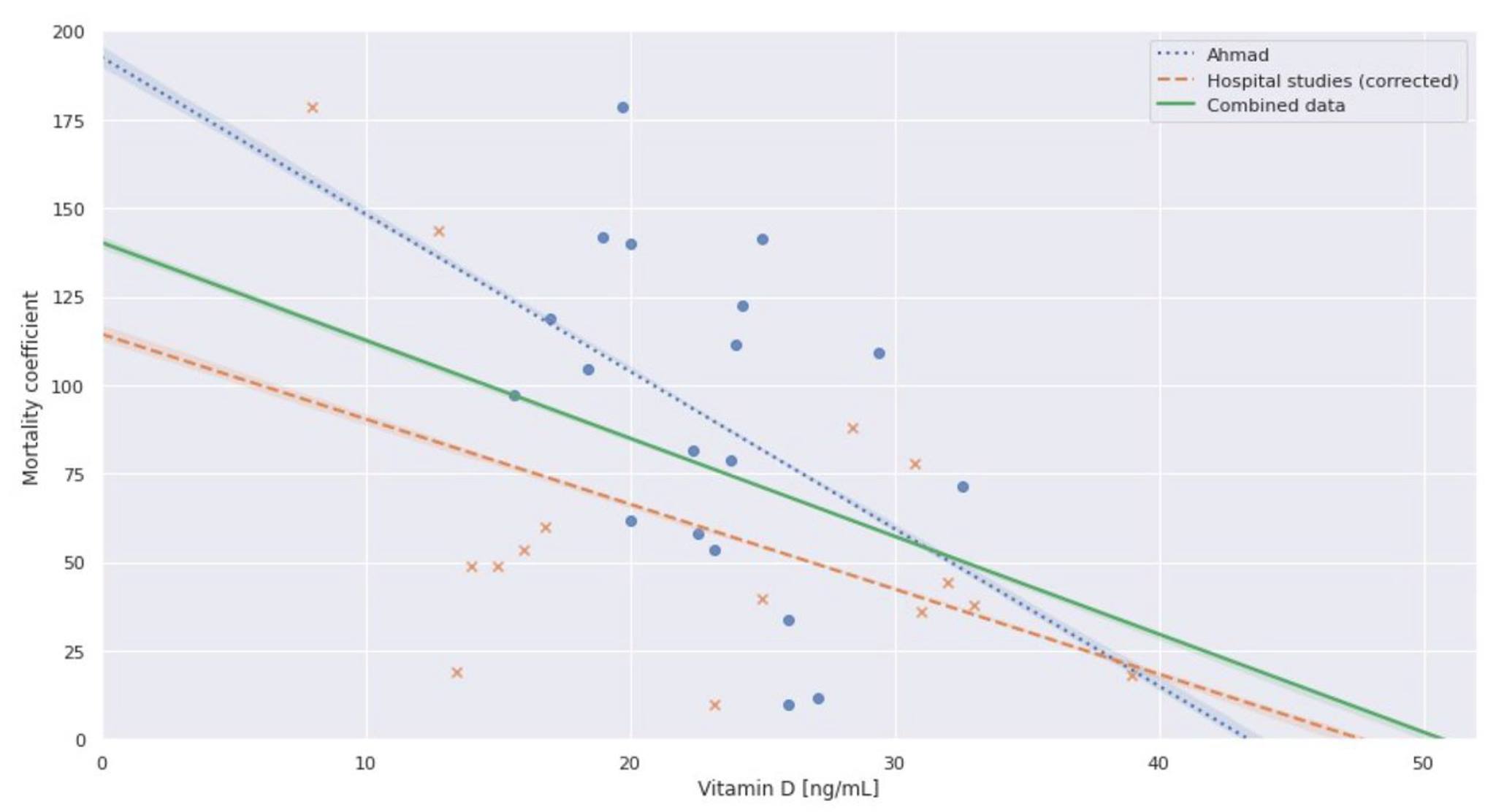 COVID-19 mortality risk correlates inversely with vitamin D3 status, and a mortality rate close to zero could theoretically be achieved at 50 ng/ml 25(OH)D3: Results of a systematic review and meta-analysis

Discussion
This study investigated the correlation between vitamin D levels as a marker of a patient’s immune defense and resilience against COVID-19 and presumably other respiratory infections. It compared and merged data from two completely different datasets. The strength of the chosen approach lies in its diversity, as data from opposite and independent parts of the data universe yielded similar results. This result strengthens the hypothesis that a fatal outcome from COVID-19 infection, apart from other risk factors, is strongly dependent on the vitamin D status of the patient. The mathematical regressions suggested that the lower threshold for healthy vitamin D levels should lie at approximately 125 nmol/L or 50 ng/ml 25(OH)D3, which would save most lives, reducing the impact even for patients with various comorbidities.

This is – to our knowledge – the first study that aimed to determine an optimum D3 level to minimize COVID-19 mortality, as other studies typically limit themselves to identifying odds ratios for 2–3 patient cohorts split at 30 ng/ml or lower.

Finding only half as many “infected” patients (confirmed by PCR tests) with a vitamin D level >30 ng/ml [115] does not prove protection against physical infection but rather against its consequences – a reduction in the number of days of people being infectious must statistically lead to the demonstrated result of only half as many positive PCR tests recorded in the group >30 ng/ml vs. the group <30 ng/ml. This “protection” was most effective at ∼55 ng/ml, which agrees well with our results. This result was also confirmed in a 2012 study, which showed that one of the fatal and most feared symptoms of COVID-19, the out-of-control inflammation leading to respiratory failure, is directly correlated with vitamin D levels. Cells incubated in 30 ng/ml vitamin D and above displayed a significantly reduced response to lipopolysaccharides (LPS), with the highest inflammatory inhibition observed at 50 ng/ml [167]. This result matches scientific data on the natural vitamin D3 levels seen among traditional hunter/gatherer lifestyles in a highly infectious environment, which were 110–125 nmol/L (45–50 ng/ml) [168]. There is a major discrepancy with the 30 ng/ml D3 value considered by the WHO as the threshold for sufficiency and the 20 ng/ml limit assumed by D-A-CH countries. Three directors of Iranian Hospital Dubai also state from their practical experience that among 21 COVID-19 patients with D3 levels above 40 ng/ml (supplemented with D3 for up to nine years for ophthalmologic reasons), none remained hospitalized for over 4 days, with no cytokine storm, hypercoagulation or complement deregulation occurring [169]. Thus, we hypothesize that long-standing supplementation with D3 preceding acute infection will reduce the risk of a fatal outcome to practically nil and generally mitigate the course of the disease. However, we have to point out that there are exceptions to that as a rule of nature: as in any multifactorial setting, we find a bell curve distribution in the activation of a huge number of genes that are under the control of vitamin D. There may be genetic reasons for this finding, but there are also additional influencing parameters necessary for the production of enzymes and cells of the immune system, such as magnesium, zinc, and selenium. Carlberg et al. found this bell curve distribution when verifying the activation of 500 – 700 genes contributing to the production of immune system-relevant cells and proteins after D3 supplementation [170]. Participants at the low end showed only 33% activation, while others at the high end showed well over 80% “of the 36 vitamin D3-triggered parameters”. Carlberg used the term (vitamin D3) low and high responders to describe what he saw. This finding may explain why a “D3 deficient” high responder may show only mild or even no symptoms, while a low responder may experience a fatal outcome. It also explains why, on the one hand, many so-called “autoimmune” inflammation-based diseases do highly correlate with the D3 level based on, e.g., higher latitudes or higher age, when D3 production decreases, but why only parts of the population are affected: it is presumably the low responders who are mostly affected. Thus, for 68%-95% (1 or 2 sigma SDs), the suggested D3 level may be sufficient to fight everyday infections, and for the 2.5%-16% of high responders, it is more than sufficient and is completely harmless. However, for the 2.5%-16% of low responders, this level should be raised further to 75 ng/ml or even >100 ng/ml to achieve the same immune status as mid-level responders. A vitamin D3 test before the start of any supplementation in combination with the patient’s personal history of diseases might provide a good indication as to which group the patient belongs to and thus whether 50 ng/ml would be sufficient, or, if “normal” levels of D3 are found (between 20 and 30 ng/ml) along with any of the known D3-dependent autoimmune diseases, a higher level should be targeted as a precaution, especially as levels up to 120 ng/ml are declared to have no adverse effects by the WHO.

As future mutations of the SARS-CoV-2 virus may not be susceptible to the acquired immunity from vaccination or from a preceding infection, the entire population should raise their serum vitamin D level to a safe level as soon as possible. As long as enough vitamin K2 is provided, the suggested D3 levels are entirely safe to achieve by supplementation. However, the body is neither monothematic nor monocausal but a complicated system of dependencies and interactions of many different metabolites, hormones, vitamins, micronutrients, enzymes, etc. Selenium, magnesium, zinc and vitamins A and E should also be controlled for and supplemented where necessary to optimize the conditions for a well-functioning immune system.

A simple observational study could prove or disprove all of the above. If one were to test PCR-positive contacts of an infected person for D3 levels immediately, i.e., before the onset of any symptoms, and then follow them for 4 weeks and relate the course of their symptomatology to the D3 level, the same result as shown above must be obtained: a regression should cross the zero baseline at 45-55 ng/ml. Therefore, we strongly recommend the performance of such a study, which could be carried out with very little human and economic effort.

Even diseases caused by low vitamin D3 levels cannot be entirely resolved by ensuring a certain (fixed) D3 level for the population, as immune system activation varies. However, to fulfill Scribonius Largus’ still valid quote “primum non nocere, secundum cavere, tertium sanare” from 50 A.D., it should be the duty of the medical profession to closely look into a medication or supplementation that might help (tertium sanare) as long as it has no known risks (primum non nocere) within the limits of dosages that are needed for the blood level mentioned (secundum cavere).

Unfortunately, this does not imply that in the case of an acute SARS-CoV-2 infection, newly started supplementation with 25(OH)D3 will be a helpful remedy when calcidiol deficiency is evident, especially if this deficiency has been long lasting and caused or exacerbated typical comorbidities that can now aggravate the outcome of the infection. This was not a question we aimed to answer in this study.

Limitations
This study does not question the vital role that vaccination will play in coping with the COVID-19 pandemic. Nor does it claim that in the case of an acute SARS-CoV-2 infection, a high boost of 25(OH)D3 is or could be a helpful remedy when vitamin D deficiency is evident, as this is another question. Furthermore, empirical data on COVID-19 mortality for vitamin D3 blood levels above 35 ng/ml are sparse.

Conclusions
… In this publication, we used a meta-analysis of two independent sets of data. One analysis is based on the long-term average vitamin D3 levels documented for 19 countries. The second analysis is based on 1601 hospitalized patients, 784 who had their vitamin D levels measured within a day after admission, and 817 whose vitamin D levels were known pre-infection. Both datasets show a strong correlation between the death rate caused by SARS-CoV-2 and the vitamin D blood level. At a threshold level of 30 ng/ml, mortality decreases considerably. In addition, our analysis shows that the correlation for the combined datasets intersects the axis at approximately 50 ng/ml, which suggests that this vitamin D3 blood level may prevent any excess mortality. These findings are supported not only by a large infection study, showing the same optimum, but also by the natural levels observed in traditional people living in the region where humanity originated from that were able to fight down most (not all) infections in most (not all) individuals.…

Therefore, based on our data, the authors strongly recommend combining vaccination with routine strengthening of the immune system of the whole population by vitamin D3 supplementation to consistently guarantee blood levels above 50 ng/ml (125 nmol/l). From a medical point of view, this will not only save many lives but also increase the success of vaccination. From a social and political point of view, it will lower the need for further contact restrictions and lockdowns. From an economical point of view, it will save billions of dollars worldwide, as vitamin D3 is inexpensive and – together with vaccines – provides a good opportunity to get the spread of SARS-CoV-2 under control.

Although there exists very broad data-based support for the protective effect of vitamin D against severe SARS-CoV-2 infections, we strongly recommend initiating well-designed observational studies as mentioned and/or double-blind randomized controlled trials (RCTs) to convince the medical community and the health authorities that vitamin D testing and supplementation are needed to avoid fatal breakthrough infections and to be prepared for new dangerous mutations.