NOTE: Since this is a Hawaiian newspaper, the title seems to indicate the attack would be on Hawaii, but apparently, the text of the article didn’t say where the location would be.
I haven’t been able to find the text for the article to see exactly what it said.
– –
From: ralphepperson.com

ROOSEVELT KNEW ABOUT PEARL HARBOR BEFORE IT HAPPENED! 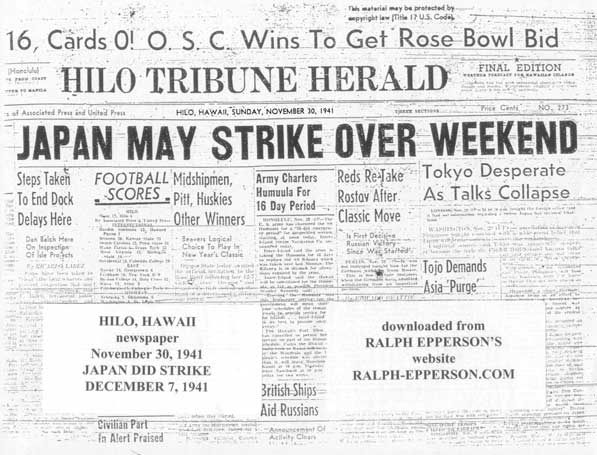 The next day, President Franklin Roosevelt called the attack “A DAY OF INFAMY,” and asked Congress for a Declaration of War.

It was granted, and America was in WORLD WAR TWO.

Many at the time questioned how “A SURPRISE ATTACK” could have happened, and whether President Roosevelt should have known about it in advance and warned our forces in Hawaii.

NINE CONGRESSIONAL investigations were conducted, during and after the war, and each examined the question: DID PRESIDENT ROOSEVELT KNOW ABOUT THE ATTACK BEFORE IT HAPPENED, AND IF SO, WHY DID HE DO NOTHING TO PREPARE OUR FORCES.

And NINE CONGRESSIONAL INVESTIGATIONS all concluded that ROOSEVELT DID NOT KNOW IN ADVANCE!

A few years ago, I saw a photo copy of the HILO, HAWAII TRIBUNE HERALD newspaper of November 30, 1941, the Sunday before the attack. I called the library in HILO, HAWAII and they photocopied the top half of their front page and sent it to me.

The HEADLINE of this newspaper reads:

ASK YOURSELF THIS QUESTION:

How could this NEWSPAPER KNOW IN ADVANCE, but PRESIDENT ROOSEVELT DID NOT KNOW?

One could reasonably conclude that PRESIDENT ROOSEVELT’S INTELLIGENCE SOURCES were better than the NEWSPAPERS!

In other words, NINE CONGRESSIONAL INVESTIGATIONS WERE WRONG: President ROOSEVELT had to have known ……… even a Hawaii newspaper knew!!!

(If you want documented evidence that Roosevelt DID KNOW ABOUT THE ATTACK BEFORE IT HAPPENED, please read the pertinent chapter in the book I wrote entitled THE UNSEEN HAND, AN INTRODUCTION TO THE CONSPIRATORIAL VIEW OF HISTORY. It is discussed in the catalog that follows this report.

Thank you for your interest.

Related:
[real history] The Bombing of Pearl Harbor: Roosevelt sacrificed over 2400 American Seamen’s lives to bring US into WWII — By the time that Japan finally attacked all eight steps in the intelligence memo had occurred. Prior to the invasion, most Americans were isolationists.
[real history] Robert Stinnet, author of “Day Of Deceit: The Truth About FDR and Pearl Harbor” takes on 3 NSA agents trying to discredit his important, groundbreaking work!
Douglas Dietrich on ‘Coast to Coast AM’ 12/7/12: Pearl Harbor Attack — The Japanese learned their codes had been cracked and they were sailing into a trap after one of their midget submarines had been sunk
10 False-Flag Operations that Shaped Our World — From Nero to 9/11
Pearl Harbor – Mother of All Conspiracies
A Review of David Ray Griffin’s book, “The New Pearl Harbor Revisited: The Definitive Treatment of 9/11″
A PNAC Primer: How We Got Into This Mess
Had Only America Known: U.S. & Russian Intelligence Assassinated General Patton, Who Wanted to Free Eastern Europe Before Coming Home