END_OF_DOCUMENT_TOKEN_TO_BE_REPLACED

Big Pharma blasphemes the Lord’s supper — mocking — having rejected God’s natural remedies which cost pennies that defend against Covid-19, that would have prevented this tyrannical, medical lockdown!

“They think they are gods because they toy with peoples lives under Rockefeller medicine and police power” – a friend.

Universities have turned many away from Christ! 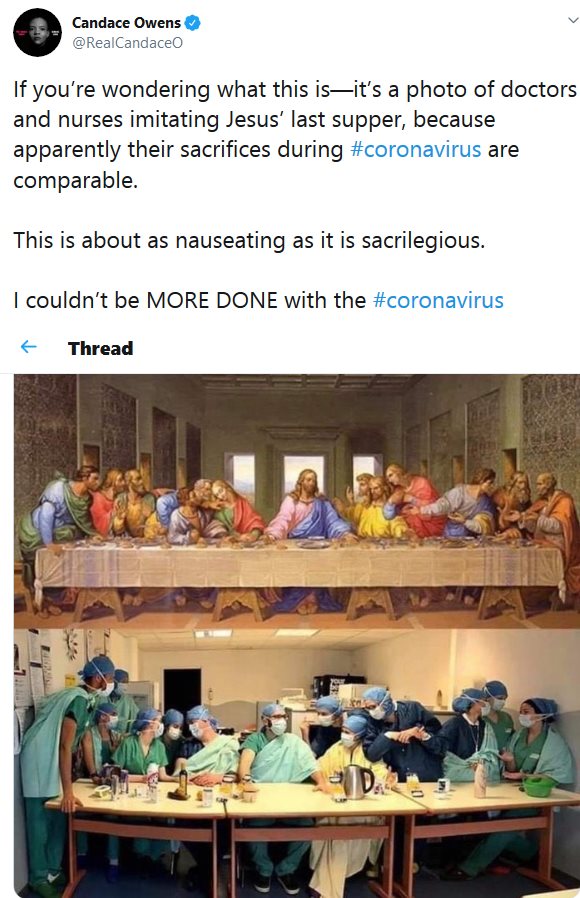 END_OF_DOCUMENT_TOKEN_TO_BE_REPLACED

JANUARY 26, 2020
…Bryant set out last spring to create the next beloved YA book franchise with The Wizenard Series, an intersection of Harry Potter-esque fantasy and traditional sports. On March 31, the second volume, The Wizenard Series: Season One will hit bookshelves, once again offering young readers magic, basketball and self-discovery.

END_OF_DOCUMENT_TOKEN_TO_BE_REPLACED

From 1931 to 1964, Coca-Cola ads had Santa delivering toys (and playing with them!), pausing to read a letter and enjoy a Coke, visiting the children who stayed up to greet him and raiding people’s refrigerators. …

Due to its enormous advertising budget and worldwide appearance, Coca-Cola placed Santa in every home; from America to Africa and Australia. …we are pretty confident that if it wasn’t for Coca-Cola, the look of Santa we all know and love wouldn’t be so popular…. END_OF_DOCUMENT_TOKEN_TO_BE_REPLACED

Jesus Christ vs Santa Claus: Santa truly has been created to be a counterfeit Jesus to the Secular World!

When we carefully compare the myth of Santa Claus versus the real Biblical story of Jesus Christ, we are presented with the shocking truth that Santa has been thoroughly created to replace Jesus Christ in too many people’s lives. …

Who could possibly have arranged a celebration that encourages your kids to direct their petitions to Santa instead of to God? Call the Santa hotline, write Santa a letter? Put out food and drink offerings for him? END_OF_DOCUMENT_TOKEN_TO_BE_REPLACED

The racial supremacist, Talmudic, NWO “leaven of the Pharisees” Jesus warned us about.

A somewhat disjointed compilation from the sources listed below the video, featuring especially Nathan Stolpman of Lift the Veil.

END_OF_DOCUMENT_TOKEN_TO_BE_REPLACED

It’s likely this interview was filmed in 2016 or early 2017 for Framing the World’s ‘Babylon USA’ film, which came out in 2017. Apparently filmed in Texe and Wanda Marrs’ home.

Various subjects including the occult origins of the USA

111:10 Catholicism: praying to Mary and the saints

END_OF_DOCUMENT_TOKEN_TO_BE_REPLACED

God is also not ‘MOTHER Nature,’ as TalmudVision repeatedly pushes down our throats.
– –

END_OF_DOCUMENT_TOKEN_TO_BE_REPLACED

A Call For An Uprising’s attitude is not good here. He says he’s a Christian, but he clearly isn’t even trying to love Johnny Depp as much as himself (Jesus’ second greatest commandment). The Call says at 10:00: “I laugh at him, just like ‘who gives a crap!” Then he says “God bless all of you….”
I posted a comment to him. Otherwise, this is a well done exposé.
– –

END_OF_DOCUMENT_TOKEN_TO_BE_REPLACED

Kuru is a very rare, incurable neurodegenerative disorder that was formerly common among the Fore people of Papua New Guinea. Kuru is caused by the transmission of abnormally folded prion proteins, which leads to symptoms such as tremors, loss of coordination, and neurodegeneration.

The term kuru derives from the Fore word kuria or guria (“to shake”),[1] due to the body tremors that are a classic symptom of the disease and kúru itself means “trembling”.[2] It is also known as the “laughing sickness” due to the pathologic bursts of laughter which are a symptom of the disease. It is now widely accepted that kuru was transmitted among members of the Fore tribe of Papua New Guinea via funerary cannibalism. Deceased family members were traditionally cooked and eaten, which was thought to help free the spirit of the dead.[3] Women and children usually consumed the brain, the organ in which infectious prions were most concentrated, thus allowing for transmission of kuru. The disease was therefore more prevalent among women and children. (source)

END_OF_DOCUMENT_TOKEN_TO_BE_REPLACED

Sarah Ruth Ashcraft has come forward and announced that she was subjected to CIA brainwashing techniques and child sex trafficked to Hollywood at age 13 years and raped by Hollywood star Tom Hanks.

“The number one problem in Hollywood is, and has always been – pedophilia!” Corey Feldman correctly stated. What a shame Corey didn’t just name names when he had all the cameras on him, like we all have. Naming names is the only way victims are going to expose the CIA child trafficking operation behind 99% of child kidnapping and child sex trafficking.

Perverted predator Harvey Weinstein is being scapegoated to cover for the truth about Hollywood – famous male AND FEMALE pedophile actors and producers who like to rape kids.

Head Hollywood Luciferian MERYL STREEP is of one them! She prefers to have sex with 14 year old girls at specially organised Hollywood pedophile parties.

That’s why Meryl Streep and Tom Hanks get on so well post-Harvey Weinstein and the #sheknew scandal … why she called Weinstein “God” during an acceptance speech. …

Tom Hanks and Meryl Streep teamed up with another Hollywood pedophile – Steven Spielberg, to make a shite film together [‘The Post’ – editor]. Spielberg has been raping kids for decades, along with his pedo buddy George Lucas – whom the entire cast of Star Wars had to have sex with in order to get their parts. Carrie Fischer said she had to sleep with George Lucas to get the part of Leia – and mysteriously died weeks later. … END_OF_DOCUMENT_TOKEN_TO_BE_REPLACED

Fiona Barnett who will be telling us about an International Child trafficking, and Pedophile Ring. You will not believe your ears when you hear how deep it runs.From Australian Prime Ministers, Actors, Politicians, and a President. Hear Fiona Barnett tell her story of Horrific Crimes against her and others who have come forward because of her bravery.

Another interview with Mark: Pedophiles Down Under With Fiona Barnett Live!

My notes and transcriptions:
6:00 Nicole Kidman and her father, Antony Kidman
11:00 Scientology, Freemason, O.T.O., Catholic church
21:00 Elton John
32:00 Richard Nixon violent pedo
33:00 Bohemian Grove is just a big, pedophile,Satanic ritual abuse orgy.” Fiona witnessed someone murdered there.
34:35 Billy Graham, good friend of Richard Nixon… “not a Christian”….”
35:40 Disneyland: “Walt Disney was a pedo.” Pedo parties after dark.
101:35 “Most of the victims are dead. The vast majority of are dead. They didn’t make it. They were either murdered, or they committed suicide, or they were suicided, or they were overdosed, or they did overdose from heroin…. Or they are inmates at mental institutions babbling like a baby.”
104:35 “I just want to say to victims, look: no one is ever pushed beyond what they can endure. And when they’re tested [‘it not feels like it’?], they will always be provided with the means of escape. Suicide is not an option. You’ll never be pushed beyond what you can endure. And I know because I’ve been pushed right to the edge.”

END_OF_DOCUMENT_TOKEN_TO_BE_REPLACED

We’ve reached the point in TV where the hero is a deviant, misfit
or weirdo. We cheer as he makes the world conform to him.
Where have we seen this before? Is it any surprise that Hollywood is dominated by Jews [author, Henry Makow is a Jew] and homosexuals?

Luciferians always push the limits of what is acceptable
and make the unacceptable acceptable.

“We must introduce into their education all those principles which have so brilliantly broken up their order.”  (Protocols of Zion,16 )
“We have already contrived to possess the minds of the goy communities…[they are] looking through the spectacles we are setting astride their noses.” (Protocols of Zion,12)
“All nations will be swallowed up in the pursuit of gain, and in the race for it will not take note of their common foe.” (Protocols of Zion, 4)
“Television is the Satanic family altar,” Anton LaVey, said in 1966, “Television is the major mainstream infiltration for the new satanic religion.”
“Television Ruined My Life” updated from Oct 2013
by Henry Makow Ph.D.

When I was a child in the 1950’s, television was pretty wholesome. That’s how I got hooked.
As a youth and young man, I was naive and idealistic. I assumed I lived in a benevolent and free society that was attempting to raise everyone to a higher level, materially and spiritually.  I looked to mass media and schooling for information, insight and guidance.
After watching “America in Primetime”, (2011) a four-part documentary history of TV, on Netflix, I realize that TV is not entertainment. It is social engineering. It made me dysfunctional and depressed. It has done this to millions of people. END_OF_DOCUMENT_TOKEN_TO_BE_REPLACED

“One day, when my Kabbalah teacher, Eitan Yardeni, asked how I was doing….”

– Donald Trump — Trump: The Way to the Top: The Best Business Advice I Ever Received, p. 188