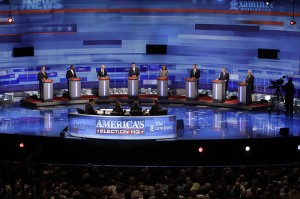 It should be evident to anyone with half a brain that the recent Republican presidential debates have been incredibly slanted in favor of certain candidates.  The candidates that the mainstream media favor are receiving far more talking time than the other candidates during the debates.  It is hard to defend the legitimacy of our political system after watching what a farce the race for the Republican nomination has become.  First, the major news networks dedicate thousands of hours of “programming” to telling us that candidates such as Mitt Romney and Rick Perry are “top tier” and that nobody else has a legitimate chance.  Then, once the poll numbers are skewed by that relentless coverage, they use those polls to justify giving the “favored candidates” more questions during the debates.  The funny thing is that even if support for a favored candidate drops off dramatically (such as with Rick Perry), that candidate will still be given extra time during the debates.  What you are about to see is mathematical proof of dramatic media bias and favoritism during the Republican debates.  After reading this information, it will be hard to keep believing that our political system is fair.

It seems like the bigger the media outlet, the worse the bias and the favoritism becomes.  For example, the Republican debate on CBS the other night was a total sham.  During the nationally televised portion of the debate, Rick Perry got more than five times as much talking time as Ron Paul did.

But instead, favored candidates such as Mitt Romney and Rick Perry were given huge amounts of talking time during the CBS debate and candidates that the mainstream media has disdain for such as Ron Paul and Michele Bachmann were virtually ignored.

The following is how one blog broke down the talking time for the Republican debate on CBS on Saturday night….

Does that look fair to you?