She died in a plane crash leaving Washington while using plane tickets given to her by Obama.

I believe this is the only major airline crash within the US since 9-11.

My Silence Cannot Be Bought

I’ve chosen to go to court rather than accept a payoff from the 9/11 victims compensation fund. Instead, I want to know what went so wrong with our intelligence and security systems that a band of religious fanatics was able to turn four U.S passenger jets into an enemy force, attack our cities and kill 3,000 civilians with terrifying ease. I want to know why two 110-story skyscrapers collapsed in less than two hours and why escape and rescue options were so limited.

I am suing because unlike other investigative avenues, including congressional hearings and the 9/11 commission, my lawsuit requires all testimony be given under oath and fully uses powers to compel evidence. 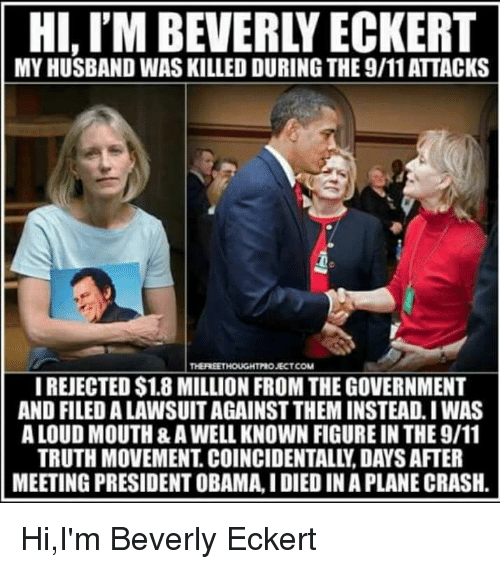 The victims fund was not created in a spirit of compassion. Rather, it was a tacit acknowledgement by Congress that it tampered with our civil justice system in an unprecedented way. Lawmakers capped the liability of the airlines at the behest of lobbyists who descended on Washington while the Sept. 11 fires still smoldered.

And this liability cap protects not just the airlines, but also World Trade Center builders, safety engineers and other defendants.

The caps on liability have consequences for those who want to sue to shed light on the mistakes of 9/11. It means the playing field is tilted steeply in favor of those who need to be held accountable. With the financial consequences other than insurance proceeds removed, there is no incentive for those whose negligence contributed to the death toll to acknowledge their failings or implement reforms. They can afford to deny culpability and play a waiting game.

By suing, I’ve forfeited the “$1.8 million average award” for a death claim I could have collected under the fund. Nor do I have any illusions about winning money in my suit. What I do know is I owe it to my husband, whose death I believe could have been avoided, to see that all of those responsible are held accountable. If we don’t get answers to what went wrong, there will be a next time. And instead of 3,000 dead, it will be 10,000. What will Congress do then?

So I say to Congress, big business and everyone who conspired to divert attention from government and private-sector failures: My husband’s life was priceless, and I will not let his death be meaningless. My silence cannot be bought.