The entire article is excellent, and easy to read.
– –
From: Infowars

How can anyone not see that the U.S. economy is collapsing all around us?  It just astounds me when people try to tell me that “everything is just fine” and that “things are getting better” in America.  Are there people out there that are really that blind?  If you want to see the economic collapse, just open up your eyes and look around you.  By almost every economic and financial measure, the U.S. economy has been steadily declining for many years.  But most Americans are so tied into “the matrix” that they can only understand the cheerful propaganda that is endlessly being spoon-fed to them by the mainstream media.  As I have said so many times, the economic collapse is not a single event.  The economic collapse has been happening, it is is happening right now, and it will continue to happen.  Yes, there will be times when our decline will be punctuated by moments of great crisis, but that will be the exception rather than the rule.  A lot of people that write about “the economic collapse” hype it up as if it will be some huge “event” that will happen very rapidly and then once it is all over we will rebuild.  Unfortunately, that is not how the real world works.  We are living in the greatest debt bubble in the history of the world, and once it completely bursts there will be no going back to how things were before.  Right now, we are living in a “credit card economy”.  As long as we can keep borrowing more money, most people think that things are just fine.  But anyone that has lived on credit cards knows that eventually there comes a point when the game is over, and we are rapidly approaching that point as a nation.

At first, living on credit can be a lot of fun.  You can live a much higher standard of living than you otherwise would be able to.

But inevitably a day of reckoning comes.

If the federal government and the American people were forced at this moment to live within their means, the U.S. economy would immediately plunge into a depression.

But our politicians and the mainstream media continue to perpetuate the fiction that we can live in this credit card economic fantasy land indefinitely.

And most Americans could not care less about the future.  As long as “things are good” today, they don’t really think much about what the future will hold.

As a result of our very foolish short-term thinking, we have now run up a national debt of 16.4 trillion dollars.  It is the largest debt in the history of the world, and it has gotten more than 23 times larger since Jimmy Carter first entered the White House. 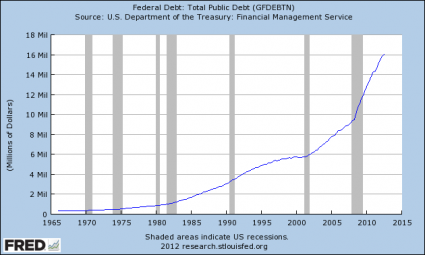