Mayor Ethan Berkowitz’s wife, Mara Kimmel, had been the driver of a Volvo station wagon on March 1, 2007, when her vehicle struck a man in a cross walk at the corner of Arctic Blvd. and International Airport Road. The man died.

The mayor comes into the picture in that incident because at the time he had just finished several years service as a well-known legislator, and at least one witness said that Kimmel received special treatment from Anchorage Police investigators due to her connection to powerful politicians. And he was preparing for another campaign — for Congress.

Police told the media at the time, “the driver of the Volvo was likely blinded by the sun as she was turning at the green light.”

ONE OF HUNDREDS OF PAGES OF COURT FILINGS IN THE CASE OF THOMPSON FAMILY VS. MARA KIMMEL.

Thompson, on the other hand, was powerless. He was dead, although the police still ended up issuing a citation for him because he improperly crossed the street. It was mid-morning, bitter cold, and he  may have been staggering.

His family, in their wrongful death lawsuit, said they could not even get Kimmel’s name from police until March 21. The case, the family alleged, “is already compromised in favor of Mara Kimmel. It is ironic that the police are advocating against the victim’s request for expressed purpose of protecting the victim’s investigation.”

Meanwhile, Kimmel was asking to have all information related to the case quashed. Her attorneys practically called the Thompson family gold-diggers for wanting access to her insurance records and telephone records.

When Kimmel, who is a lawyer and who has a Ph.D., approached the intersection to turn, she seemed to be in a hurry to beat the light, said one of the witnesses, who was less than three feet away from the accident. The victim, George Thompson, ended up on Kimmel’s windshield.

Witness John Fox, a North Slope worker, jumped out of his car to render aid to Thompson, while Kimmel went over to the side of the road and started making phone calls on her cell phone. She never approached the dying man to render assistance, witnesses said.

Shortly thereafter, Fox would be told by the first officer on the scene to go over to a parking lot and wait, which Fox presumed meant that police would want a statement from him, since he saw everything from close up. Instead, police at that location shooed him off.

Media coverage was slight, mentioning the victim’s name, but not the driver:

It wasn’t until the family of the deceased man brought the wrongful death lawsuit against Kimmel that a private investigator contacted Fox and interviewed him. And only after that did Fox get a call from the police, and they interviewed him as well.

Berkowitz was the Democratic Minority Leader in the Alaska House from 1999 to 2007. He had just unsuccessfully run for lieutenant governor at the time, and Mark Begich, his political ally, was mayor of Anchorage.

A year after the lawsuit was initiated by the Thompson family, Berkowitz was on another campaign and the local media was nowhere to be found.  The wrongful death case was still in court, Kimmel was trying to protect her phone records, trying to deny culpability, and trying to protect the family’s assets.

After all, Ethan and Mara had interests in several small businesses, including Snow City Café  and a real estate venture. Mara taught political science at the University of Alaska Anchorage and was a senior fellow at Institute of the North.

The dueling filings show the pattern of plaintiffs trying to gain information, and defendants trying to protect it. The Thompson family wanted those cell phone records to determine if defendant Kimmel had been on the phone at the time of the collision, and who she may have talked to after the accident. The family’s investigator would want to depose whoever spoke to her on the phone and see if she had admitted guilt to them.

These are the types of things that can create hundreds of pages of documents in the court system, and indeed, they did in this case. Must Read Alaska looked through them and discovered that there was certainly enough to add to any political story of the era that involved Berkowitz’s aspirations for higher office.

Witness John Fox said at the time, and still believes that Kimmel got off because she was connected to a powerful politician. Fox believes he is one of the best witnesses because the accident occurred right next to his vehicle in the intersection and he saw it all unfold. To this day he feels there was a cover-up.

Critics might say that the death caused by Kimmel in 2007 and the lawsuit against her that lasted into 2008 is not relevant to a campaign in 2018. But then, the same could be said of Rebecca Logan’s 2006 divorce and 2010 DUI.

Yet, the mainstream media appeared to consider it irrelevant in 2008, when Berkowitz ran against Rep. Don Young. The Kimmel lawsuit was still in the courts. There was no mention of the tragic occurrence, which could have had serious consequences for Kimmel — even jail, if the investigation had broken a different way.

Meanwhile, Mayor Begich, in charge of the Anchorage police, was running against Sen. Ted Stevens in 2008. Both Begich and Berkowitz are ambitious Democrats, and both had a lot to lose if this wrongful death and its handling in favor of Kimmel came to light. It never did.

Kimmel’s wrongful death history also wasn’t relevant to the media when Berkowitz ran for governor in 2010, nor when he ran for Anchorage mayor in 2015, and won against Amy Demboski, who the media had hounded mercilessly over a statement she had never made about Berkowitz’s sexual proclivities.

And in 2018, the media went after Logan, but once again was silent on Anchorage’s First Lady, Mara Kimmel.

And although Kimmel is not the candidate running for office, she has a distinct political role in the city, advises the mayor on matters involving immigration, and has even been given her own page on the municipality’s official web site, where she attaches a video of herself titled, ironically, “Creating Our Collective Impact.” 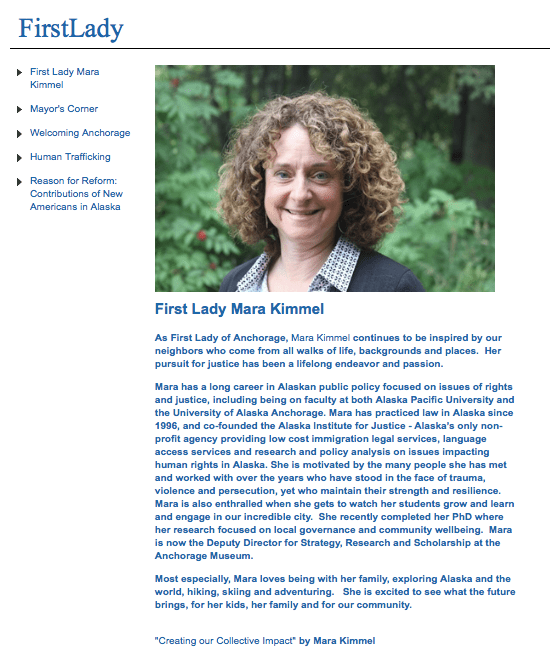