END_OF_DOCUMENT_TOKEN_TO_BE_REPLACED

Weddleton states reasons why the Covid executive order should not be extended, then votes for it. Only Allard and Kennedy oppose.

1776 Alaska cites chapter and verse that states an election to replace Mayor Berkowitz is required.

END_OF_DOCUMENT_TOKEN_TO_BE_REPLACED

Cardboard tombstones raised to remember the jobs lost in Anchorage.

END_OF_DOCUMENT_TOKEN_TO_BE_REPLACED

What Lisa is accusing Trump of is often true of herself — one of the worst Republican senators, an embarrassment to Alaska, destroyer of the U.S. Constitution and the USA itself!

The Anchorwoman of our local TV newscast* in Anchorage covered for Lisa last night, changing “a good thing” to “the good thing,” when she read Lisa’s statement. Lisa wrote: “…I don’t think he’s capable of doing a good thing.”

* ‘Alaska’s News Source’ is now the strange name of our only remaining TV news station (other than an underfunded one that no one watches).

Alaska Sen. Lisa Murkowski calls on President Trump to resign, questions her future as a Republican

U.S. Sen. Lisa Murkowski said Friday that Donald Trump should resign the presidency immediately and that if the Republican Party cannot separate itself from Trump, she isn’t certain she has a future with the party.

“I want him to resign. I want him out. He has caused enough damage,” Murkowski, R-Alaska, said during an interview from her small Capitol office, steps away from the Senate chambers that were invaded by pro-Trump rioters on Wednesday.

Murkowski is the first Senate Republican to call for Trump’s resignation, according to CNN and national congressional reporters.

“I think he should leave. He said he’s not going to show up. He’s not going to appear at the inauguration. He hasn’t been focused on what is going on with COVID. He’s either been golfing or he’s been inside the Oval Office fuming and throwing every single person who has been loyal and faithful to him under the bus, starting with the vice president. He doesn’t want to stay there. He only wants to stay there for the title. He only wants to stay there for his ego. He needs to get out. He needs to do the good thing, but I don’t think he’s capable of doing a good thing,” she said.

Even before Election Day, the president refused to say whether he would accept the election results, Murkowski said, and then tried to overturn the results.

“I will attribute it to the president, who said, even after his vice president told him that morning, ‘I do not have the constitutional authority to do what you have asked me to do. I cannot do it. I have to protect and uphold the Constitution.’ Even after the vice president told President Trump that, he still told his supporters to fight. How are they supposed to take that? It’s an order from the president. And so that’s what they did. They came up and they fought and people were harmed, and injured and died,” Murkowski said.

1:29:00 Those admitted to Alaska hospitals are considered positive even without being tested and when coming in for another condition.

1:31:30 Caller makes important points about masks and the PCR tests.

1:34:40 Dr. Michael Hanifen, DC, Anchorage chiropractor: PCR tests can’t tell if a person is sick or not. No study shows that masks work, because they don’t. No one is advising people about vitamin D, C and zinc, all of which have been proven to help. Cross-contaminating through mask wearing and reusing masks over and over without washing them.

“We have had several things put out by our board for the chiropractic community that have encouraged us not to talk about vitamins, not talk about things that will boost your immune system for fear of backlash. I put out a video. I refuse to delete it.”

4:04:28 Only three assembly members vote against the emergency extension; Jamie Allard, Crystal Kennedy, and joining them for the first time, John Weddleton!

END_OF_DOCUMENT_TOKEN_TO_BE_REPLACED

1:54:10 Lady tells the backstory behind the former owner of Table 6 restaurant, who is standing behind her.

END_OF_DOCUMENT_TOKEN_TO_BE_REPLACED

From: Department of Health and Human Services, State of Alaska

The Alaska State Public Health Laboratories in Anchorage and Fairbanks use real-time reverse-transcriptase polymerase chain reaction (rtRT-PCR) to accurately identify the presence or absence of SARS-CoV-2 viral genetic material (ribonucleic acid, or RNA) in clinical specimens collected from the respiratory tract of patients.

Tested ‘Positive’ For COVID-19? Be Sure To Ask This Question — Governments are basing their decisions on CT values that are very high, too high

END_OF_DOCUMENT_TOKEN_TO_BE_REPLACED

“He needs to be removed,” said Assembly member Chris Constant.

“He needs to be 86’d,” said Assembly member Pete Petersen, evidently wanting to get rid of the man for good. The Urban Dictionary says that this means he needs to be killed.

Neither Assembly member realized their mics were still hot. END_OF_DOCUMENT_TOKEN_TO_BE_REPLACED

Campbell: The path to socialism has started 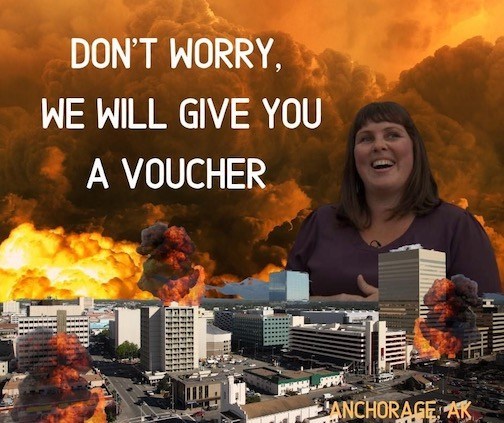 You might at first think Caretaker Mayor Austin Quinn-Davidson is showing compassion in her announcement today to provide food vouchers to those in our community who are struggling because of the China virus.

People are suffering because of her draconian measures. If she cared one iota about people, Quinn-Davidson would not be shutting down businesses left and right, forcing people into poverty and unemployment, thereby creating a need for this hand-out. AQD’s “compassionate” gesture to offer food vouchers to those she put out of work is sinful.

END_OF_DOCUMENT_TOKEN_TO_BE_REPLACED

Alaska uses the highly suspect Dominion voting software to count votes, and still hasn’t counted all of the votes 11 days after the election! Voting results have shifted far to the left of what they were after election night.

Joe Miller says Governor Dunleavy won’t allow a recount. And he’s been openly pushing for local officials to implement covid mandates, while he threatened to do so himself in his recent video that he called every cell phone in Alaska to tell us all personally.

Joe Miller on Facebook, 11/12/20 [Look for his intro to this article: Georgia Announces Full Hand-Recount for Presidential Election; DOJ Election-Crime…]

Pretty sad that Alaska, with numerous vote fraud issues in the past – including this year’s legislative races – won’t allow a hand count. Why would our Republican governor prevent that? Is he part of the problem? END_OF_DOCUMENT_TOKEN_TO_BE_REPLACED

This is what it sounds like to skip rocks across a thin layer of ice, just after freeze up in Alaska. And hey, bonus if you get to do it underneath the Northern Lights. END_OF_DOCUMENT_TOKEN_TO_BE_REPLACED

In the now-private Save Anchorage Facebook group, Alaska State Senator Lora Reinbold posted her sister’s comment responding to Dan Fagan’s hit-piece on Lora Reinbold published by Must Read Alaska: Reinbold wonders if Dunleavy should step aside, calls his mandates ‘socialist’

Lora thought her sister’s comment was deleted by Must Read Alaska, but it was being held for moderation. It’s now there, but truncated. So here is the entire comment.

I’m Lora Reinbold’s identical twin sister, Lisa. Dan Fagan just attacked her fiercely in an article, even though she has supported his radio show many times. I posted comments to the article but within moments my comments were censored. I must come to her defense since she endlessly defends her beloved Alaskans.

I’m proud the faithful way she fulfills the oath she took to defend our constitution. She knows you miss your freedoms that our leaders have tried to suppress. She is not a snowflake when facing challenges in defending your freedoms like so many others. Senator Reinbold is a true freedom fighter! She doesn’t put on a mask for her fights or fall victim to masqued lies! When a virulent storm brews she won’t tell you to stay home and be safe. In contrast, she will tell you to face it boldly.

My oldest sister, on the other hand, who happens to be in healthcare, has influenced political leaders to mandate mask wearing so everyone looks sick. It helps a few businesses but hurts most others in an incalculable way economically and socially.

In regard to religious freedom, for Dan to infer that the decisions made by our political leaders haven’t impacted churches is not based in reality. Where does he go to church? Is he back living in New Orleans which he also claims to be home?

Thousands of people of faith are suffering immensely!

I tried to reach out and share the perspective I formed after talking to hundreds of Alaskans with the Governor but to no avail.

No one has ever broken my trust in government more than Dunleavy. He falsely declared an emergency when one person was positive for the novel corona virus! We were not in an emergency and that is a fact.

(The 1964 earthquake was a true emergency.) Leading by fear or what “could happen” is not healthy. If he would perhaps stop looking through a microscope and pick up a telescope he would be able to see all Alaskans better. I’ve never seen Alaskans in more distress during the past half century than I have in 2020 under the conjured “mandates”. END_OF_DOCUMENT_TOKEN_TO_BE_REPLACED

Sad 🙁 So Alaska’s governor appears to be a tyrant after all?

Dan Fagan was hoping Dunleavy would use his bully pulpit to stand up to Berkowitz. Now we see he supported Berkowitz’s mask mandates, and says other leaders should impose them, instead of telling the people about vitamin D3, C and zinc, led by Dr. Zink.

On masks, Alaska Gov. Dunleavy tells local leaders to use power they say they don’t have

END_OF_DOCUMENT_TOKEN_TO_BE_REPLACED

Music and lights are stunning starting at 4:30!

END_OF_DOCUMENT_TOKEN_TO_BE_REPLACED

Pro-abortion Al Gross would be a disaster! His campaign is financed by $25M from leftists in the lower-48.

I’ve never been impressed with Dan Sullivan, and notice how much he brings up Lisa Murkowski, who is a disaster, even a traitor to our country by some of what she’s done. But I wouldn’t believe anything Al Gross says. He’d be far worse than Sullivan, would probably vote with the left as much or more than Murkowski.

Gross is being funded by the left so the left can take the Senate.

END_OF_DOCUMENT_TOKEN_TO_BE_REPLACED

Now I know for sure that Mayor Berkowitz also swore to defend the U.S. Constitution, which he violated with his tyrannical covid mandates, some of which still stand.

Accompanied by her ‘wife,’ Austin Quinn-Davidson swears to uphold the U.S. and Alaska Constitutions as well as the Anchorage Charter.

Quinn-Davidson was appointed by the Anchorage Assembly after Mayor Ethan Berkowitz stepped down because of scandal.

“She is joined by her wife, Dr. Stephanie Quinn-Davidson.”

“So help me God” at the end was replaced with “congratulations.”