“They brainstormed what he could do about it, his deteriorating and impossible situation. It included [Steve] Bannon. He’d become a close friend, and had become an advisor to him in terms of public relations.” – Edward Jay Epstein

END_OF_DOCUMENT_TOKEN_TO_BE_REPLACED

Largest Canyons Were Formed by the Receding Flood

Two newly discovered canyons in Greenland and Antarctica have a lot in common with Grand Canyon. Both canyons are as deep as or deeper than Grand Canyon and are at least 60 miles in length. But what’s especially revealing is the fact that they all appear to have formed around the same time.

The Flexner Report (which discredited all forms of medicine except allopathy) was the tool by which John D. Rockefeller used the AMA to dominate Western Medicine with Big Pharma drugs.

After the Flexner Report, the AMA only endorsed schools with a drug-based curriculum. It didn’t take long before non-allopathic schools fell by the wayside due to lack of funding.

How John D. Rockefeller Used The AMA To Take Over Western Medicine

The Flexner Report was a very useful tool commissioned by oil magnate John D. Rockefeller. Rockefeller had made a massive fortune with Standard Oil and was setting his sights on gaining a monopoly in the drug and pharmaceutical industry.

However, first he had to get rid of the competition, which consisted of natural non-allopathic healing modalities – naturopathy, homeopathy, eclectic medicine (botanical and herbal medicine), holistic medicine, etc.

Hemp was also a threat to his plans, since cannabis has tremendous medical benefit – it can be used to alleviate pain for numerous diseases and even has anti-cancer properties. END_OF_DOCUMENT_TOKEN_TO_BE_REPLACED

This is subscription only, but I’m putting it up because it’s such an excellent hour overview of what’s really going on. I’ve subscribed to the Jeff Rense Show for years, especially since Jeff has Joel Skousen on every other week.

…enjoy this epic smack down from Dr Hovind at Rutgers University. To see the full debate click the link: https://www.youtube.com/watch?v=MHQ8Y…

END_OF_DOCUMENT_TOKEN_TO_BE_REPLACED

“It is now clear that big tech and the mainstream media worked with the NIH to suppress knowledge of a drug that could have ended the pandemic last summer. This is not mere professional negligence. This is a crime.” 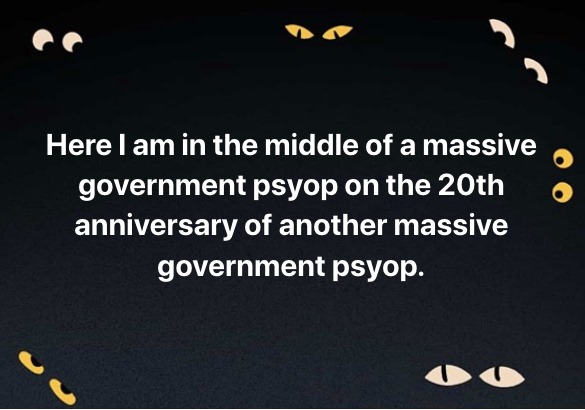 END_OF_DOCUMENT_TOKEN_TO_BE_REPLACED

James Perloff has studied all of our wars. False flags have been used to justify almost all of them.

END_OF_DOCUMENT_TOKEN_TO_BE_REPLACED

AFGHANISTAN INVASION BEGAN AND ENDS IN A LIE

Almost everything about American involvement in Afghanistan has been a lie, from the original excuse to invade after 9/11 to the notion that no one could have predicted how quickly Afghanistan security would collapse as the US withdrew. As Thomas DiLorenzo writes, after a close study of true history, “...one realizes the breath-taking enormity of the lies and falsehoods about American history that have been concocted by generations of court historians in service of the state and statism – of the ruination of America.” The Biden administration and its servile generals were warned by military intelligence not to evacuate the Bagram military base until after all US and NATO personnel and their camp followers had been evacuated, but they did so anyway. As U.S. Army veteran and Pennsylvania Senate candidate Sean Parnell said, “our generals are more concerned about fighting Tucker Carlson than they were the Taliban.” During the 20 years of occupation and conflict, military officials continually lied to Congress about both the claimed military successes and the continued need for a military presence in the country supposedly to keep “terrorism from descending upon America.” The phony war on terror has been the defining fib that has driven everything about US occupation of Afghanistan. Osama bin Laden was never anything but a CIA controlled mercenary who had nothing to do with planning the attacks on 9/11. The US claimed that Afghanistan was harboring bin Laden and al Qaeda to cover for other globalist agendas. It was a lie, and so was the raid in Pakistan that claimed to have killed him. But after 20+ years of useless intervention warfare, and failed nation building, even the globalists saw it was time to pull the plug on this hell hole of money and bloodshed—but only because they hope to achieve other evil agendas in the process. …

According to an article by the Mayo Clinic, vitamin D may not actually be as toxic as was once believed: Vitamin D Is Not as Toxic as Was Once Thought: A Historical and an Up-to-Date Perspective

In the 1940s, vitamin D was used for rheumatoid arthritis. But, the amounts being used were between 200,000 and 300,000 IUs of vitamin D. The reason this could have helped is that vitamin D helps support the immune system and helps lower inflammation.

In the 1950’s they were fortifying products like dairy products with vitamin D. But, there were some complaints from parents with children who had side effects. The fortification of vitamin D in dairy was banned in Europe, but not in some other countries, including America.

Years later, it was discovered that these children might have experienced these side effects due to a rare genetic disease called Williams syndrome. With Williams syndrome, you don’t actually want to take vitamin D at all.

Now, when you look at vitamin D, it always says something along the line of “don’t take too much, you could experience a toxic effect.”

But, according to this article by the Mayo Clinic, it would take getting 50,000 to 100,000 IUs of vitamin D for months to years before vitamin D would become toxic. This is actually a lot more than what most people consider toxic. …

END_OF_DOCUMENT_TOKEN_TO_BE_REPLACED

Sad to hear the truth about this. I’ve been a big fan.

Skousen: Kristi Noem took too much credit for keeping South Dakota open, which she was against. SD legislature kept SD open

Did Gov. Kristi Noem Sell Out? – Dean Henderson in South Dakota — “They got to her”

Despite the public support for school shutdowns, the introduction of a bill that would give the state Health Secretary lockdown authority, and two executive orders which encourage business restrictions and a stay-at-home order, Noem continues to wrestle for the torch as America’s number one anti-lockdown politician.

Gov. Kristi Noem Blasted Other Republicans For Lockdowns, But She Didn’t Entirely Oppose Them, Either

Republican South Dakota Gov. Kristi Noem made headlines last week for calling out fellow GOP governors on lockdowns, but her own record on the issue isn’t spotless.

Noem has consistently claimed she is the only governor in America not to order any business or church to shut down. A closer examination of her record reveals that she did support several restrictive measures in the early days of the pandemic that her office is now trying to distance itself from.

In March 2020, South Dakota Rep. Lee Qualm introduced House Bill 1297 at the request of the Governor’s Office. The bill would have granted the Secretary of Health the power to “order the closure of or place reasonable restrictions on the use of any public or private location, including a business, park, school, or other location that promotes public gathering, if reasonably necessary to slow or prevent the spread of communicable diseases during a public health emergency.”

The bill was defeated in the South Dakota legislature by a vote of 50-17, according to Jon Schweppe, the director of policy and government affairs at the American Principles Project. While the passage of the bill would not have resulted in Noem herself ordering business shutdowns, it would’ve granted that authority to the state’s Health Secretary via a bill requested by the governor.

South Dakota also shut down schools in March 2020 through the end of the 2019-2020 academic school year. Noem came out emphatically during the summer to insist that South Dakota’s K-12 schools would reopen in the fall, but she was whole-heartedly on board with the initial closure. … END_OF_DOCUMENT_TOKEN_TO_BE_REPLACED

George W. Bush Admits to Explosives Being in WTC during 9/11. In this video of his speech on the 5th anniversary of 9/11, Bush admitted to explosives in the WTC attack as if the terrorists themselves planted the explosives, “set high enough so that the people above wouldn’t be able to escape.” Of course, everyone knows the terrorists couldn’t have had access to the buildings to load remote controlled charges high up in the WTC, so his admission hints that he may have been trying to explain away the fact that the buildings came down by controlled demolition, without saying drawing attention to how terrorists could have done that.

On Friday September 15 [2006], President George Walker Bush gave a press conference, and near the beginning of the conference he says;

“…For example, Khalid Sheikh Mohammed described the design of planned attacks of buildings inside the U.S. and how operatives were directed to carry them out. That is valuable information for those of us who have the responsibility to protect the American people. He told us the operatives had been instructed to ensure that the explosives went off at a high — a point that was high enough to prevent people trapped above from escaping…”

END_OF_DOCUMENT_TOKEN_TO_BE_REPLACED

One of the CIA’s most powerful and secretive programs, Operation Mockingbird, was uncovered in the 1970s during the Church Hearings. It’s goal: use the mainstream media to spread propaganda.

END_OF_DOCUMENT_TOKEN_TO_BE_REPLACED

Snodgres claims the Murrah building was bombed for two reasons, both having to do with records stored there and the destruction of those records. They were:

1) The first set of records were those concerning the Clinton’s and their CIA op’s in Mena, Arkansas which involved drug smuggling, gun running, and the whole Iran Contra affair.

2) The second set of records of greater concern had to do with the Anthrax vaccine and the use of depleted uranium weaponry, both which had many adverse effects on our troops which participated in Gulf War 1. These records were to be used in lawsuits against the federal government for what is known as Gulf War Syndrome.

1:11:30 How J. Edgar Hoover was blackmailed: taped by Mafia with boyfriend doing stuff in their bugged bathroom

Feds cleaned up the unions

END_OF_DOCUMENT_TOKEN_TO_BE_REPLACED

Lockdowns Do Not Control the Coronavirus: The Evidence

THE FRAUDULENT DR FAUCI – PART I: THE AIDS RACKET

Dr Fauci: 40 Years Of Lies From AZT To Remdesivir

Here’s a bullet point summary of the article, although I highly recommend reading the entire article: END_OF_DOCUMENT_TOKEN_TO_BE_REPLACED

Anthony Fauci: 40 Years of Lies From AZT to Remdesivir

As the planet’s “Virus Tsar” since 1984, he has spread misinformation and ignored critical questions. The consequences could hardly be more fatal.