They openly prayed to Satan during the rituals

Join us as Derrick Broze interviews ritual abuse survivor Kate Talley for the second time. Kate shares her story of surviving ritual abuse as a child in Utah.

END_OF_DOCUMENT_TOKEN_TO_BE_REPLACED

Eye opening — human traficking in South Dakota! Everyone should watch this excellent interview with this Christian lady doing her part by God’s grace!

Evangelical churches are even being used to baptize, then traffic….

New Cathy O’Brien interview — trauma based mind-control survivor, who was used by the elite to compromise and blackmail many famous people, who are mentioned in her book, which I read in the ’90s, where she tells her story in detail. In that decade, I then tried to minimize the mind-control program by learning as much as I could and through lots of prayers. I discovered a large component of mind-control is demonic, forces that can be broken through prayer.

Dr. Stanley Monteith had Cathy on his show often. The Granada Forum video from the ’90s (a few seconds shown in this video) is a good overview. I transcribed a few quotes from this recent interview:

46:55 So many people masked up who never would have, and they had to in order to keep their jobs. Or to take the injection; they’re so ashamed that they did. It has weakened their own resolve and belief in themselves. … So they have to look to something else to lead them. … Masks are used in MK-ULTRA mind-control. My daughter was trafficked in a mask. …it depersonalizes them. We can’t recognize each other. … It makes us feel like we don’t have a voice. … It causes compliance….”

1:01:20 “The very first thing that goes with any level of mind-control is compassion, and that’s why we have so much snap judgment going on, because people don’t stop to listen to each other anymore, and have compassion. They’re too busy repeating the narrative that’s in their head: ‘Mask up.'”

END_OF_DOCUMENT_TOKEN_TO_BE_REPLACED

Warwick Middleton, MD, is a psychiatrist and a professor at the School of Medicine at the University of Queensland. He is the Director of the Trauma and Dissociation Unit, Belmont Hospital is in Brisbane Queensland, Australia. Dr. Middleton is a former president of the International Society for the Study of Trauma and Dissociation. Today, I interview him about his extensive knowledge and experience treating Dissociative Identity Disorder, Sigmund Freud’s disavowal of DID, and the controversy surrounding The False Memory Syndrome Foundation. END_OF_DOCUMENT_TOKEN_TO_BE_REPLACED

I started studying how mind-control works late last century, when I discovered the globalists have been using it to take down America. Child sexual abuse is a key component in mind-control, since many of those abused disassociate in order to minimize the trauma.

Many founders of psychology were abused themselves, and then became abusers, so their theories have covered up the problems more than solved them.

Psychology also never considers how demons affect people emotionally, and how demons drive all types of lust and are probably involved in all psychosis that they’re trying to say are “normal” now.

Psychology tried to downplay child sexual abuse and mind-control, inventing the false memory syndrome excuse. Talmudists need to destroy US society to bring in their NWO and “messiah.” They invented and control modern psychology.

Author Nick Bryant has been documenting how sexual abuse in America, including its use to blackmail many US politicians and famous people.

I highly recommend his video podcasts, which just started this year!

END_OF_DOCUMENT_TOKEN_TO_BE_REPLACED

Many children wait to report or never report child sexual abuse. Therefore, the numbers below likely underestimate the true impact of the problem. Although estimates vary across studies, the research shows:

I only found Part 1 boring, the whodunit intro, until trying again after watching parts II through VII.

Related:
The Keepers | Official Trailer [HD] | Netflix “I can testify that over 100 victims have been abused.”

The Keepers with Gemma Hoskins | The Nick Bryant Podcast

END_OF_DOCUMENT_TOKEN_TO_BE_REPLACED

Prisons and psych hospitals are filled because of.

END_OF_DOCUMENT_TOKEN_TO_BE_REPLACED

A. Loneliness is the root cause of mass formation.

B. Lack of meaning

1.  Compelling narrative — gives them something to get behind

2. False perception of issue resolution
The solidarity with the collective is much stronger than with individuals — cold toward people. Paranoia, willingness to report anyone who doesn’t comply.
Hypnotized can’t focus on reality anymore.
Now, people are even more lonely and isolated.
Prepared for the next mass formation crisis.
They have a collective, heroic battle, and don’t want to wake up.
Continual data that confirmed their narrative’s validity, and censorship of data that exposed it kept them mind-controlled.
Only about 20-30% are deeply involved. 60-70% go along.
They believe it’s their ethical duty to destroy anyone who doesn’t participate in this new solidarity.

END_OF_DOCUMENT_TOKEN_TO_BE_REPLACED

HEAVY! Abuse & even murder in the Catholic church, followed by coverup and now a 6 part documentary. Jean tells her story.

This episode of the Nick Bryant Podcast features survivor Jean Hargadon-Wehner, from the Netflix docuseries “The Keepers.” Jean was the first victim to speak out against the abuse she endured at Archbishop Keough High School. We talk about her experience at Archbishop Kenogh High School, the murder of Sister Cathy Cesnik, and Jean’s road to recovery.

END_OF_DOCUMENT_TOKEN_TO_BE_REPLACED

Jenny Marie Hatch is a mother of five and new grandmother. She lives in Boulder, CO and writes a blog where she promotes individual health freedom and parental rights. She is also publishing daily updates about the ongoing case in Utah involving Satanic ritual abuse.

END_OF_DOCUMENT_TOKEN_TO_BE_REPLACED

I could first tell Pearson was an honest journalist when I watched his coverage of the claim that Assad gassed his own people. Pearson was there, on the ground, and told the truth, as he does again here at minute-17.

Since then, I’ve seen him tell the truth about Big Pharma, the election steal, etc..

39:00 He lived for a year in China. “Everybody was indoctrinated… totally obedient. They don’t question anything, and they have this doctrine of saving face.” They know they’re lying, others know, but no one says it.

END_OF_DOCUMENT_TOKEN_TO_BE_REPLACED

Thanks to Shaking My Head Productions for the inspiration for this video. Billy Idol’s “Eyes without a face” providing the sound track for a scene from The Handmaid’s tale. The face masks that we are being forced to wear are truly dehumanizing and it’s all by design.

“Believe in something even if it’s wrong and makes you look stupid. Just obey.” 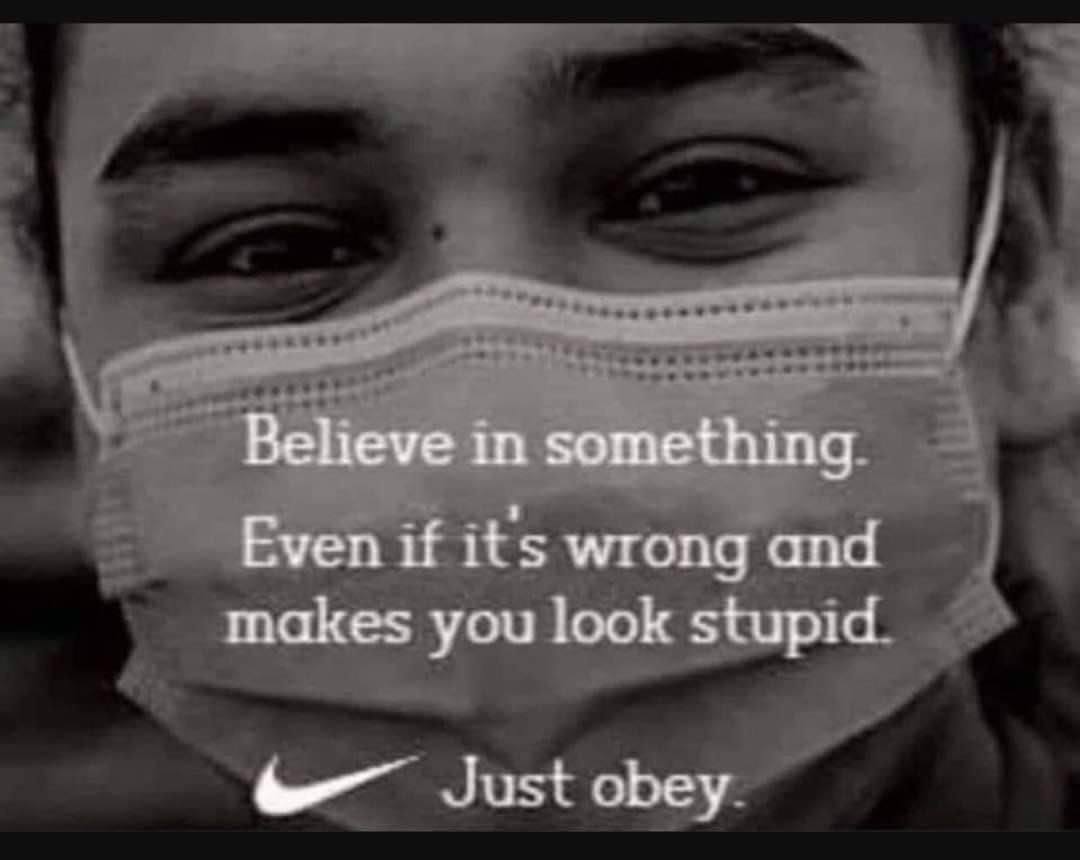 ‘brainwash’
to make someone believe something by repeatedly telling him or her that it is true and preventing any other information from reaching him or her:

“Their government is trying to brainwash them into thinking that war cannot be avoided.” (source)

The man Big Pharma used then to convince everyone to trust Fauci now: Robert Young as Marcus Welby, M.D. — people’s beloved father figure who would *never ever* lie or do evil.

In a shocking experiment, random beachgoers in San Diego, California are asked if they’ll sign a petition supporting the arrest and detention of all unvaccinated adults until they agree to take the COVID-19 vaccine.

END_OF_DOCUMENT_TOKEN_TO_BE_REPLACED

Story from The Alaska Watchman

I was age-13, and remember hearing this song played over and over on AM radio, which they did way too much. I was so glad when I found KQRS FM, a progressive rock station that would never repeat the same song in 24 hours, and would sometimes play entire sides of albums (real vinyl record LPs that real DJs played on a turntable in real time).

I now wonder what this did to America’s psyche, who heard it hundreds of times ad nauseam. I wasn’t mature enough spiritually at the time to think through the implications, being so young and not becoming a Christian until five years later.

A funeral home in Anchorage now uses it in their ad, playing the part that assures people they’re going to heaven when they die; though, this song wasn’t even written by a Christian, and may be mocking Christianity, as this writer theorizes. END_OF_DOCUMENT_TOKEN_TO_BE_REPLACED

54:30 Kim Jong-un is waiting for the west to be weakened before nuking US.

1:23:30 “You have to be a liar in a communist society all the time in order to survive.” – China Uncensored

1:26:00 China plays a 30-minute news show on every channel every day showing how dangerous, violent, racist and bad the USA is.

1:49:45 N. Korean officials can sexually have any woman they want, hundreds. Lust parties.

204 Watch a movie or read the Bible and get executed in N. Korea.

⁠Her book: In Order to Live: A North Korean Girl’s Journey to Freedom

END_OF_DOCUMENT_TOKEN_TO_BE_REPLACED

The Branch Covidian Cult, Psychopathic Eyes and a Weird Parallel from X-Files

END_OF_DOCUMENT_TOKEN_TO_BE_REPLACED

“Some people ask: ‘shows like ‘Saturday Night Live’ used to be funny? How come they’re not anymore?’ Because Hollywood’s comedy isn’t based on truth anymore. It’s based on controlling the narrative. An agenda of control squeezes the truth right out. And if you don’t have truth, you don’t have actual comedy.”

“We entertain you while we entrain you.”

END_OF_DOCUMENT_TOKEN_TO_BE_REPLACED

“Exposure to true information does not matter anymore. … The facts tell nothing to him. … He will refuse to believe it until he receives a kick in his fat bottom.”

The Democrats know that if they try to sell us socialism directly, we aren’t going to buy it. So what do they do instead? Watch the full speech here: How to Defeat the Left’s Socialism in 30 Seconds: Liz Wheeler

END_OF_DOCUMENT_TOKEN_TO_BE_REPLACED

9:00 Mr. Rogers interviews the lady who played the Wicked Witch of the West in ‘The Wizard of Oz’ in 1975. He then tells the children: “girls and boys like to play witches, and when you feel like as if you’d like to play something a little bit scary, the witch is a fine thing to play.”

END_OF_DOCUMENT_TOKEN_TO_BE_REPLACED

Why so many are easily manipulated through Covid:

“We need to get over the fear of death.”

“When you look at the fear of death, this is where the power of doctors comes from. … When we lose this fear of death, so many other fears disappear. … If we are going to go on thinking ‘I must do anything to stay alive,’ then we’re just going to hand our power to anybody we think will help us achieve that.”

“..dismantling the psychological stability of the human race.”

“The cause of human control throughout history is human acquiescence of the many to the few.”