Men on psychedelics wrote the Bible, NOT “Holy men of God spoke as they were moved by the Holy Spirit” (2 Peter 1:21) — Denies miracles

END_OF_DOCUMENT_TOKEN_TO_BE_REPLACED

I’ve been saying for a long time that we have to be VERY careful not tot take large amounts of zinc for a long period (without taking enough copper also), because it can cause a copper deficiency, which can reduce skin elasticity and blow out the heart. I eat oysters a few times per week instead, which has copper, zinc, and other minerals.

So Diamond could have died from a copper deficiency, like Dr. Berg and Dr. Wallach explain in these videos.

Dr. Berg: Too Much Zinc Causes a Copper Deficiency

Dr. Wallach on Copper and Aneurysms

In today’s 8-minute video on Damar Hamlin, An0maly now says Silk seems to be saying Diamond didn’t take the jab, but got the mRNA spike protein from someone else via SHEDDING. Apparently, Silk said this during another part of her speech at the memorial service (2 miu. video linked below), which An0maly didn’t know about until today.

But maybe it wasn’t shedding. Silk may have taken ZINC WITHOUT TAKING COPPER, which many truthers did for a long time (it’s one thing to do this while trying to overcome a cold, quite another to do it for years now).

This 1:40 clip of what Silk said about this during the memorial is quite interesting:

In the wild, when they want to depopulate and
sterilize a large group of animals, they usually
inJect ONE Animal, and then that one Animal inFect
the rest of the Animals

So technically and according to the science,
it doesn’t matter if you're vaxxed or not. pic.twitter.com/DGzLJwsAxH

UPDATE: Is Silk saying Diamond died from vaccine shedding [instead]? | Could also be copper deficiency from taking zinc w/o copper for too long

Deana Pollard Sacks is an author and former law professor.

END_OF_DOCUMENT_TOKEN_TO_BE_REPLACED

“That’s what makes you lose your breath and your legs weak. We’re only on this earth for a short time, and he was just ahead of us.” – Tim Pierce

Paul predicted this great falling away from truth:

“For the time will come when they will not listen to the sound doctrine, but, having itching ears, will heap up for themselves teachers after their own lusts; and will turn away their ears from the truth, and turn aside to fables.” – 2 Tim. 4:3-4

END_OF_DOCUMENT_TOKEN_TO_BE_REPLACED

Only one of the voices in people’s heads can be the Holy Spirit, if one is indeed Him. The goal is to get rid of all of the demons, to be free, and follow the Holy Spirit only.

Alanis Morissette @ 3:45 “Meditating is actually just kind of retraumatizing in some ways. … Hearing the voices extra loud in your head is not always ideal.”
END_OF_DOCUMENT_TOKEN_TO_BE_REPLACED

“Our problem is … a lack of morality.”

END_OF_DOCUMENT_TOKEN_TO_BE_REPLACED

“We were blatantly lied to by pharmaceutical companies for a long time in that space. We as clinicians need to own that responsibility and make sure that we’re being really careful about everything and anything we prescribe.”

So Alaska’s Chief Medical Officer Anne Zink learned nothing from the opioid scam. She still pushes the lied about Covid jabs.

@ 1hr 2min, Anne Zink recalls Covid patients “dying all around you” in Alaska’s hospitals, which only happened because no one was told the truth about high enough vitamin D levels (above 50 ng/ml), and the treatments that worked (including fast acting D) which weren’t used in our hospitals.

END_OF_DOCUMENT_TOKEN_TO_BE_REPLACED

Steve Kirsch: Multi-millionaire tech entrepreneur, head of the Vaccine Safety Research Foundation, founding member of vacsafety.org, misinformation superspreader, and appearing in the movie Died Suddenly is the guest on this episode of Informed Dissent. Steve, after becoming a victim of COVID-19 adverse effects, has made it his mission to expose the truth about the pandemic and the subsequent rollout of horrifically designed pharma solutions. Find out about his self-funded research, his million dollar challenge for debate opponents, and what you can do to join the fight. Listen and watch now to enhance your very own Informed Dissent with Dr. Jeff Barke.

Some “facts” about world war II have been fabricated by the victors (and even by Russia), but those, like Kanye, who think Hitler was a good guy should read this:

In this world-exclusive interview, Alex Jones’ goal is to give Ye West (formerly Kanye) a LIVE & unfiltered forum to tell the world who he really is & NOT through the filter of gatekeepers – but directly to the people!

Ali Alexander, Owen Shroyer, Nick Fuentes, and others will also join West & Jones for a lengthy roundtable discussion & will take questions from callers and social media!

END_OF_DOCUMENT_TOKEN_TO_BE_REPLACED

If it were not for the two votes of Alaska’s U.S. Senators Dan Sullivan and Lisa Murkowski, Senate Democrats would not have been able to pass their controversial bill that will codify same-sex “marriage” into federal law.

For the first time in a decade the Alaska State Senate has formed a bipartisan majority coalition. Tune into watch their announcement at a press conference at the Anchorage Legislative Information Office.

2:11:05  Tulsi Gabbard: “It blew my mind during the Covid pandemic era that Jen Psaki at the White House refused to say: hey, nutrition and being healthy could actually help you. If you get Covid, that the symptoms might not be so bad.” …

2:12:24  Joe Rogan: “If they really cared, they would tell people ‘supplement with vitamin D.’ That would have been one of the first things to say. It’s cheap. It’s not hard to do. We have plenty of it. Let’s go!”

Tulsi: “And we know statistically that people are radically deficient in this country.”

– Why Dr. Malone invented key mRNA technologies decades ago
– How the tech has been exploited by today’s pharma companies to harm billions
– Dr. Malone unloads on FDA criminality and other sensitive topics
– Dr. Malone answers false accusations about links to the CIA
– How the mRNA tech really works and WHY it takes so long to clear from the body
– Is there really a risk of chromosomal alterations from mRNA?
– Why a BETTER FUTURE is coming once we defeat the depopulation pushers
– About the Malone Institute which exposes the WEF and “Young Global Leaders”
– The DEPOPULATION question: Dr. Malone talks about the intentions behind “vaccine” harm
– See his work at RWmalonemd.substack.com

Step Out The Matrix

One Nation Under Blackmail: The Sordid Union Between Intelligence and Crime that Gave Rise to Jeffrey Epstein: Volume I, Volume II

Whitney Webb of UnlimitedHangout.com joins James once again, this time to discuss her new, epic, 900-page, two-volume tour de force, One Nation Under Blackmail. In this conversation, Webb and Corbett dive into the sordid tale of Epstein and his compatriots and begin to unravel the incredibly complex web of the intelligence/organized crime/blackmail syndicate.

END_OF_DOCUMENT_TOKEN_TO_BE_REPLACED

A November 2020 email thread obtained by the Watchman shows that Alaska’s Chief Medical Officer Dr. Anne Zink admitted, just weeks before the rollout of the experimental Covid jabs, that she did not have enough data to be able to weigh in, one way or another, as to their safety.

In Alaska, McConnell spent those millions not attacking Democrats, but smearing the name of Republican Kelly Tshibaka, to the point that several districts of the Republican Party issued resolutions of censure and condemnation of McConnell and told him to butt out of Alaska, if he was not going to support the Alaska Republican Party’s endorsed candidate, Tshibaka.

“The dirty tricks boys in the FBI have incriminating files on about 75% of Congress. Only about a dozen Congressmen are both clean and willing to fight the system.”

Joel Skousen: 75% in Congress are Blackmailable, while only about a dozen congressmen are both clean and willing to fight the system

Kanye West, who changed his name to Ye, lost an estimated $1.5 billion in business deals after Adidas dropped him and he was reportedly cancelled by Gap, Balenciaga and Def Jam Records as backlash for his remarks about Jewish people and power. Israeli President Isaac Herzog told CNN that he personally met with President Biden to persuade the White House to condemn Kanye/Ye. The ADL said it was pleased to have taken the lead in this pressure campaign. The rapper says his lawyer warned him that he could lose custody of his children. He says his Jewish trainer, Harley Pasternak, told him to “please apologize to my people” or else we will have you “institutionalized again where they medicate the crap out of you, and you go back to Zombieland forever. Playdate with the kids won’t be the same.” END_OF_DOCUMENT_TOKEN_TO_BE_REPLACED

“We will never surrender to the woke mob. Florida is where woke goes to die.”

It has been quite a while since I have talked with many of my friends. I do miss you all. Well, most of you. Just kidding. My last public event was April 30, 2021 when I went “off-line” and stopped most of my public work. My last event was aired on www.thehiddenmonks.com and YouTube. It was 15 hours divided into 28 segments. It was the culmination of 50 years of scholarship and shared public work.

So why come back into view now? Several reasons, but today my focus is on my son who is running for Congress to represent Alaska. I need your help and would appreciate your consideration of my thoughts here.

Many of my friends have been wondering what I have been doing. I will talk about some of this later in another update to all of you in a separate communication. I have been doing a lot of personal internal spiritual work, giving time to my close relationships and carefully considering when and where the work goes forward – while the future unfolds before us.

My son is a Republican, Nick III comes from a family of leaders within the Democrat Party. My family members are very different in our politics coming from both organized political parties and independent traditions. Believe me our family events are the fireworks everyone looks for on the 4th of July! The “Great Begich Debate”, happens every holiday and family gathering. Sorry no tickets, only invitation. Yet, as I say this, I want to express the deepest part of the debate and the fire that resides within it. The fire is simply Love, compassion and passion poured out. The most powerful thing to hold in the center of all relationships, Love. The foundation of family and the hope of nations. The challenge of this time in history is to find the core of respectful disagreement and passionate, well-articulated and thoughtful solutions. My family is trained in it. We live it every day. Nick III is a living example of it, which is true leadership. To Love within family, state and nation in the midst of turbulent times is what we need. 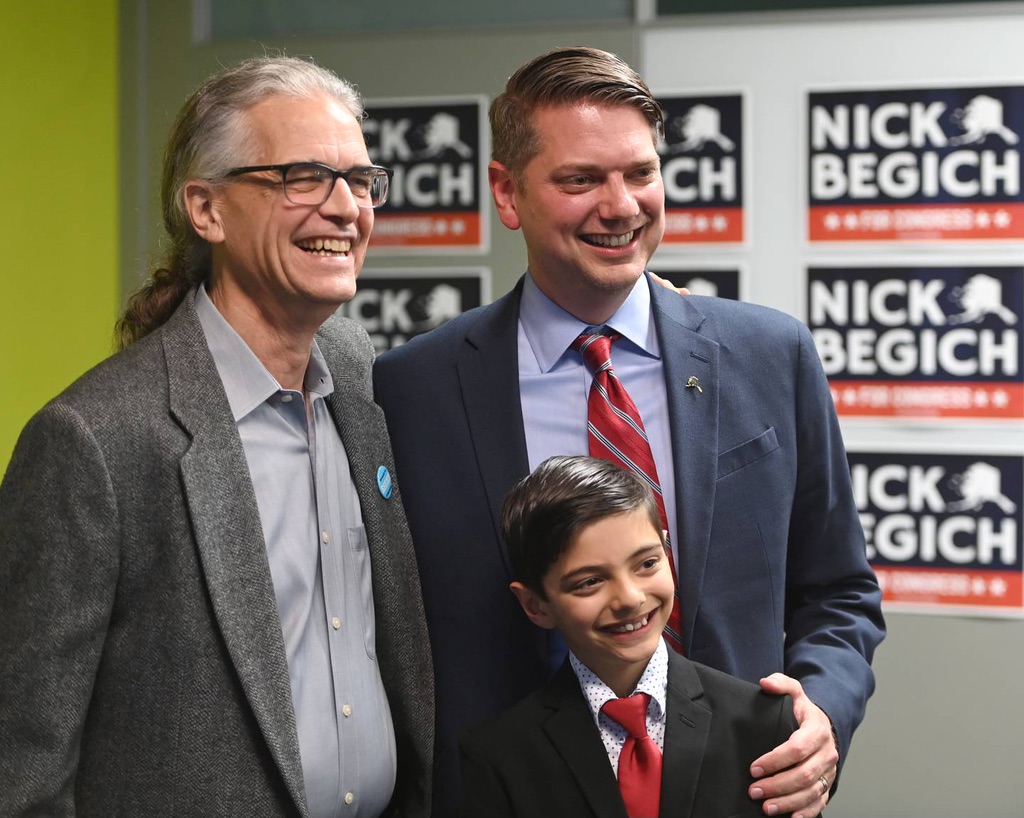