END_OF_DOCUMENT_TOKEN_TO_BE_REPLACED

According to documents in the Central Zionist Archive, the first mention of the 6 million claim was at a meeting of high ranking Zionist political figures in Palestine on January 19th, 1944 — more than a year before the war in Europe ended and a census could be taken, and a year before the Red Army entered Auschwitz. END_OF_DOCUMENT_TOKEN_TO_BE_REPLACED

END_OF_DOCUMENT_TOKEN_TO_BE_REPLACED

The Zionists offered to stop the boycott if Hitler would agree to let the Jews emigrate to Palestine. Hitler accepted, but the British stopped the emigration. END_OF_DOCUMENT_TOKEN_TO_BE_REPLACED

END_OF_DOCUMENT_TOKEN_TO_BE_REPLACED

Groundbreaking, historically important discussion! Hopefully, there will be more. END_OF_DOCUMENT_TOKEN_TO_BE_REPLACED

END_OF_DOCUMENT_TOKEN_TO_BE_REPLACED

Great Britain, in violation of all the ethics of civilized warfare that had theretofore been respected by our race, and in treacherous violation of solemnly assumed diplomatic covenants about “open cities”, had secretly carried out intensive bombing of such open cities in Germany for the express purpose of killing enough unarmed and defenceless men and women to force the German government reluctantly to retaliate and bomb British cities and thus kill enough helpless British men, women, and children to generate among Englishmen enthusiasm for the insane war to which their government had committed them. END_OF_DOCUMENT_TOKEN_TO_BE_REPLACED

END_OF_DOCUMENT_TOKEN_TO_BE_REPLACED

Host Montel Williams is fair, not manipulative like Phil Donahue and ’60 Minutes’ were. The first part with revisionists Mark Weber and David Cole is fact based. Later, the “survivors” don’t want to discuss facts, and Mark Weber is mostly left out.

13:50 Weber points out the similarity between the USA incarcerating Japanese; though, nobody died because there was no starvation or Typhus, unlike in Germany where the Allies cut off supplies to the camps. The international Jews had openly waged economic warfare on Germany; though, this didn’t justify the incarceration, which Germar Rudolf also states. And Hitler’s plan was to resettle all Jews. The plan was not extermination, but emigration.

18:20 Weber: “I believe that the total number of Jews that died in Europe under German control… is probably in the neighborhood of a million or a million and a half.” Germar Rudolf thinks it’s less than a million, but higher than the Red Cross number shown here:

INT. RED CROSS REPORT Confirms the ‘Holocaust’ of 6 Million Judaics is a Hoax – 271,000 Prisoners Died — “In the chaotic condition of Germany after the invasion during the final months of the war, the camps received no food supplies at all and starvation claimed an increasing number of victims” due to “the barbarous aerial warfare of the Allies” • The 6 Million figure is a magickal Kabbalist number, featured in newspapers in the *early* 1900’s

35:00 Cole: “They [Auschwitz tour guides] will also tell you something like when the Jews died, they all died pressed up against the door; however, the door to the so-called chamber opens in. Now, the Germans are not stupid people, and if they were going to build a room where hundreds of people would die pressed up against the door, don’t you think they would make the door to open out?”

38:05 Ukrainian man on the Holodomor: “I happen to be of Ukrainian descent, and 7 million of my people were murdered, and a disproportionate number of the perpetrators of these crimes in the Ukraine, the Ukraine famine happen to be Jews…. And I’d like to know when I’m going to get my reparations….”

END_OF_DOCUMENT_TOKEN_TO_BE_REPLACED

The first half is definitely worth watching!

6:40 “This is the only issue in the history of the west that is taboo to discuss in our universities.” – Bradley Smith

7:10 Donahue: “I believe the truth will make us free. I believe that what you’ve done here can no longer be ignored by mainstream media.”

7:50 Cole’s film: Zyclon B residue shown saturating the de-lousing chamber’s walls (to protect inmates from Typhus); though, no residue at all in the so-called murderous “gas chamber.”

9:10 “The door doesn’t lock, and this door opens into the chamber. … You cannot lock somebody into this room.” Donahue responds: “You’re a real Columbo, David.”

13:30 Cole: “History books are not about making crass generalizations. If you’re going to claim there was a gas chamber program you have to be able to offer evidence for it.”

13:42 Why the “6 million” number is already dead. The Auschwitz number was officially decreased by 3 million, but “6 million” remains the official number.

18:10 Donahue shows a clip of the Dachau “gas chamber” that Cole points out has been completely discredited!

20:15 Shermer admits the human soap story has been proven false.

21:20 Donahue announces after the break, showing an empty chair: “We lost David Cole,” and the audience cheers. We’re not told why Cole left. [I was in the audience of a Phil Donahue show filmed in Anchorage. Out of the cameras’ view, the producer gave the audience and panel cues of what to do, so this was likely prompted.] END_OF_DOCUMENT_TOKEN_TO_BE_REPLACED

END_OF_DOCUMENT_TOKEN_TO_BE_REPLACED

From: IHR, Institute for Historical Review

“60 Minutes,” America’s single most widely viewed television program and by far the most influential public affairs program, devoted the lead segment of its March 20, 1994, broadcast to Holocaust revisionism. In spite of its clearly hostile bias and deceitful omissions and distortions, this popular, primetime CBS News broadcast was a major media advance for historical revisionism. 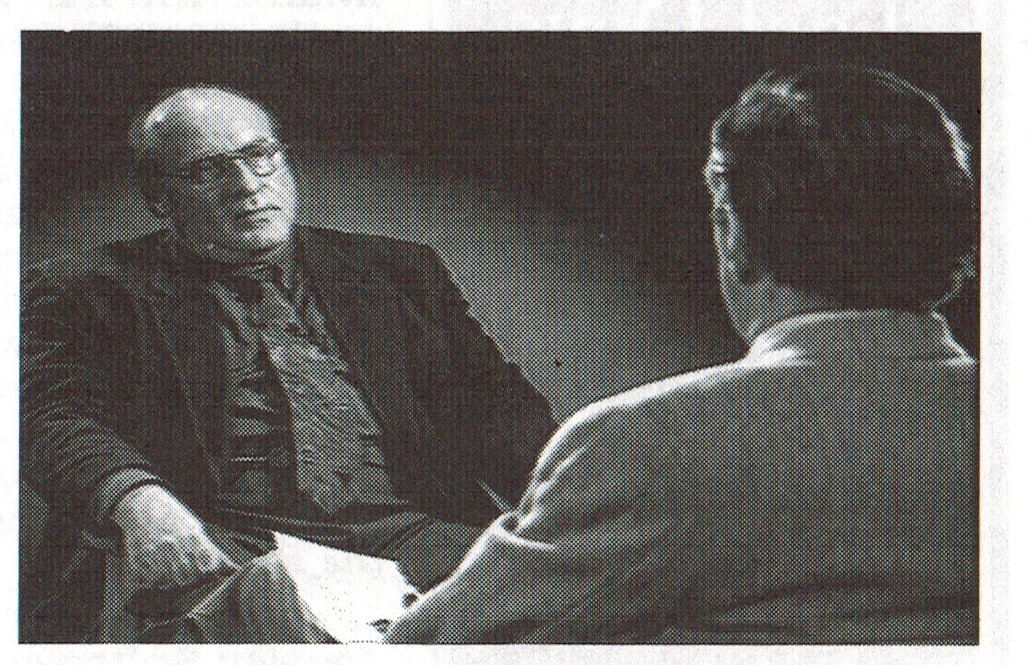 Ernst Zündel with host Mike Wallace during their appearance on “60 Minutes,” March 20, 1994