END_OF_DOCUMENT_TOKEN_TO_BE_REPLACED

We need to do a rethink: idolatry and ‘The Pledge. What happens when the nation disobeys God?

It’s dangerous to pledge allegiance to any manmade political power, since their dictates often become reverse-Christian, such as our post-9/11 regime-change wars and much of what the CIA does covertly.

Children should be taught to pledge allegiance to God instead, Who will always lead us into doing what is right.

Hitler replaced religious youth programs with the Hitler Youth (like the Boy Scouts, but on steroids), to teach children to obey him without question. Most German Lutherans then did obey Hitler instead of the Holy Spirit, when instead of defending Germany on German soil, Hitler immorally abused Germans’ loyalty by invading foreign countries unnecessarily, turning the world against Germany, which got Germany destroyed, exactly what Satan wanted. And this includes his invasions of Poland and Russia, which true history proves.

Hitler locked up the main Catholic leader in the Dachau prison who refused to shut down the Catholic youth program.

War should be last resort only:

Greg Boyd: In the kingdom of God, we are not allowed to have any enemies. All body-bags are equally tragic.

[DISCLAIMER: I’m no fan of NPR, who did this video.]

END_OF_DOCUMENT_TOKEN_TO_BE_REPLACED

Hoffman presents a more balanced view of Hitler, standing up to the Hitler worship cult. At the end of the show, Hoffman tells how he hoped his book would be the start of a discussion about the true truth about Hitler, but some revisionists have don’t want to know the truth.

I totally agree. Many so-called “revisionists” aren’t really interested in the truth about who Hitler was and what he actually did. And they’ll attack anyone who tells the truth.

Sadly, they have hijacked the movement that could have exposed the falsehoods about this period, and especially the mistruths about the ‘Holocaust,’ which the Talmudists use to hide behind, as they further their NWO agenda.

According to documents in the Central Zionist Archive, the first mention of the 6 million claim was at a meeting of high ranking Zionist political figures in Palestine on January 19th, 1944 — more than a year before the war in Europe ended and a census could be taken, and a year before the Red Army entered Auschwitz. END_OF_DOCUMENT_TOKEN_TO_BE_REPLACED

END_OF_DOCUMENT_TOKEN_TO_BE_REPLACED 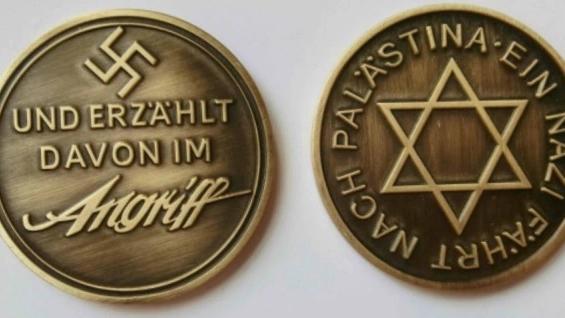 END_OF_DOCUMENT_TOKEN_TO_BE_REPLACED

The Zionists offered to stop the boycott if Hitler would agree to let the Jews emigrate to Palestine. Hitler accepted, but the British stopped the emigration. END_OF_DOCUMENT_TOKEN_TO_BE_REPLACED

END_OF_DOCUMENT_TOKEN_TO_BE_REPLACED

Groundbreaking, historically important discussion! Hopefully, there will be more. END_OF_DOCUMENT_TOKEN_TO_BE_REPLACED

M.S. King calls Hitler “The Great One” in his one-sided, Hitler-can-do-no-wrong article, which he didn’t even date: “FRANCE ATTACKED GERMANY FIRST.”

Veronica Clark, aka Weronika Kuzniar exposes the “Hitler worship cult,” whose goal isn’t to know and present the balanced truth, but to defend all of Hitler’s actions right or wrong — in the same way the Talmudists lie to defend everything the Allies did right or wrong.

END_OF_DOCUMENT_TOKEN_TO_BE_REPLACED

Excerpts I selected from Wikipedia’s lengthy and disjointed article on this subject: END_OF_DOCUMENT_TOKEN_TO_BE_REPLACED

END_OF_DOCUMENT_TOKEN_TO_BE_REPLACED

In the countless hours I spent researching German history, it seems to me that Otto Dietrich gives the most balanced description of Adolf Hitler, the main points listed below.

The Hitler I Knew: Memoirs of the Third Reich?s Press Chief

When Otto Dietrich was invited in 1933 to become Adolf Hitler’s press chief, he accepted with the simple uncritical conviction that Adolf Hitler was a great man, dedicated to promoting peace and welfare for the German people. At the end of the war, imprisoned and disillusioned, Otto Dietrich sat down to write what he had seen and heard in 12 years of the closest association with Hitler, requesting that it be published after his death.

Dietrich’s role placed him in a privileged position. He was hired by Hitler in 1933, was his confidant until 1945, and he worked – and clashed – with Joseph Goebbels. His direct, personal experience of life at the heat of the Reich makes for compelling listening.

A reader of Otto Dietrich’s book on Hitler compiled a list of notes with page numbers for the 1955, 277-page edition. [The 2010 edition has fewer pages.]

The only words of Hitler that appear to be Christian were the public propaganda to the masses, who were largely ‘Christian.’ Hitler’s trusted inner circle’s words and his words to his trusted inner circle, his policies and how the Hitler youth were indoctrinated tell the true story.

“You see, it’s been our misfortune to have the wrong religion.Why didn’t we have the religion of the Japanese, who regard sacrifice for the Fatherland as the highest good? The Mohammedan religion too would have been much more compatible to us than Christianity. Why did it have to be Christianity with its meekness and flabbiness?”

Otto Diedrich wrote in The Hitler I Knew:

“[publicly, Hitler] Talked of providence but “personally was sharply hostile to Christianity and the churches” (154).

“was convinced that Christianity was outmoded and dying. He thought he could speed its death by systematic education of German youth.” (156). END_OF_DOCUMENT_TOKEN_TO_BE_REPLACED

Great Britain, in violation of all the ethics of civilized warfare that had theretofore been respected by our race, and in treacherous violation of solemnly assumed diplomatic covenants about “open cities”, had secretly carried out intensive bombing of such open cities in Germany for the express purpose of killing enough unarmed and defenceless men and women to force the German government reluctantly to retaliate and bomb British cities and thus kill enough helpless British men, women, and children to generate among Englishmen enthusiasm for the insane war to which their government had committed them. END_OF_DOCUMENT_TOKEN_TO_BE_REPLACED