Judge Stephen Wilson shot down Gabbard’s key arguments, most prominently affirming that Google is not the government and therefore can’t be held liable for violating her First Amendment rights. END_OF_DOCUMENT_TOKEN_TO_BE_REPLACED

Just before the University of Alaska’s final 9/11 report comes out, proving the government’s report was “fraudulent!”

Richard Gage is interviewed by Josh Sigurdson of World Alternative Media at Anarchapulco 2020 in Acapulco, Mexico.

END_OF_DOCUMENT_TOKEN_TO_BE_REPLACED

“If you type in ‘abortion’ in Google, all you’ll get is references to Planned Parenthood.” – E. Michael Jones at 26:30 here: END_OF_DOCUMENT_TOKEN_TO_BE_REPLACED

Google whistleblower Dr. Robert Epstein has suggested that his wife’s fatal car crash may not have been accidental. END_OF_DOCUMENT_TOKEN_TO_BE_REPLACED

END_OF_DOCUMENT_TOKEN_TO_BE_REPLACED

Why the World Needs a Google Detox

Google got everyone to use their search engine by giving the best results. Now that almost everyone uses Google, they secretly manipulate results, which they’ve been doing for years.

I’ve seen firsthand how Google used to link to all of my posts, which changed a few years ago, keeping people from finding some of my most important posts.

I mostly use DuckDuckGo, which also doesn’t track users.

Aha, readers will say, we were right! And we were right about Google’s interference in its search results, according to a blockbuster investigative report from the Wall Street Journal this morning. Contrary to their public claims, Google actively blacklists sites, interferes with its algorithms to cook search results, and boosts big ad buyers at the expense of smaller companies. Guilty as charged. …

Over time, Google has increasingly re-engineered and interfered with search results to a far greater degree than the company and its executives have acknowledged, a Wall Street Journal investigation has found. …

More than 100 interviews and the Journal’s own testing of Google’s search results reveal:

• Google made algorithmic changes to its search results that favor big businesses over smaller ones, and in at least one case made changes on behalf of a major advertiser, eBay Inc., contrary to its public position that it never takes that type of action. The company also boosts some major websites, such as Amazon.com Inc. and Facebook Inc., according to people familiar with the matter. …

• Despite publicly denying doing so, Google keeps blacklists to remove certain sites or prevent others from surfacing in certain types of results. These moves are separate from those that block sites as required by U.S. or foreign law, such as those featuring child abuse or with copyright infringement, and from changes designed to demote spam sites, which attempt to game the system to appear higher in results.

• In auto-complete, the feature that predicts search terms as the user types a query, Google’s engineers have created algorithms and blacklists to weed out more-incendiary suggestions for controversial subjects, such as abortion or immigration, in effect filtering out inflammatory results on high-profile topics.

Some of this has no excuse except for Google’s own commercial and political purposes. There’s no good reason for Google’s searches to favor its advertisers in results that are displayed outside of their labeled ads. Doing that without disclosures, and especially by corrupting the algorithms they claim are impervious to bias, exposes them as unreliable and undermines their credibility on other claims of beneficent oversight. END_OF_DOCUMENT_TOKEN_TO_BE_REPLACED

30:00 Michael Brown’s mirrored video of his debate with Adam Green was banned for hate speech.

END_OF_DOCUMENT_TOKEN_TO_BE_REPLACED

Google is tracking your movements whether you like it or not, new investigation finds

SAN FRANCISCO (AP) — Google wants to know where you go so badly that it records your movements even when you explicitly tell it not to.
ENTIRE ARTICLE

SGTReport Terminated! Was It #QAnon or WW2 Revisionism?

END_OF_DOCUMENT_TOKEN_TO_BE_REPLACED

YouTube will ban videos that promote or link to websites selling firearms and accessories, including bump stocks, which allow a semi-automatic rifle to fire faster. Additionally, YouTube said it will prohibit videos with instructions on how to assemble firearms. The video site, owned by Alphabet Inc.’s Google, has faced intense criticism for hosting videos about guns, bombs and other deadly weapons. …

“We suspect it will be interpreted to block much more content than the stated goal of firearms and certain accessory sales,” the foundation said in a statement. “We see the real potential for the blocking of educational content that serves instructional, skill-building and even safety purposes. Much like Facebook, YouTube now acts as a virtual public square. The exercise of what amounts to censorship, then, can legitimately be viewed as the stifling of commercial free speech.”

Just an innocent private IT company? Yeah right, it’s part of the military-industrial complex, profiting from empire’s endless wars and up to its elbows in blood

In another milestone in the growing integration between the military-intelligence complex and Silicon Valley, Google’s parent company Alphabet has confirmed that it has provided software to identify targets used in the illegal US government drone murder program.

Since initiating its drone assassination program in 2009, the United States claims to have killed close to 3,000 “combatants” in drone strikes. Internal military documents show that for every one person targeted by a drone strike, nine bystanders are killed, meaning that the true toll of the US military’s airborne terrorism campaign in Yemen, Somalia, Afghanistan, Pakistan and Iraq potentially rises to the tens of thousands.

According to the American Civil Liberties Union, “A program of targeted killing far from any battlefield, without charge or trial, violates the constitutional guarantee of due process. It also violates international law, under which lethal force may be used outside armed conflict zones only as a last resort.”

Google’s complicity with the drone murder program implicates the company in the criminal activities of the US military, sparking outrage among employees after executives admitted the collaboration in an internal memo last week, according to a report by Gizmodo.

Sensitive to both the potential legal ramifications of its actions and to the hostility to America’s criminal wars both inside and outside the company, Google stressed in a statement that its collaboration “is for non-offensive uses only,” saying “the technology flags images for human review.”

But this absurd and unserious pretense, aimed to provide talking points to an uncritical, state-controlled media, is the equivalent of a Mafia getaway driver claiming he is not an accomplice to murder because he did not pull the trigger.

The US government has claimed the right to use drones to assassinate American citizens anywhere in the world, including within the borders of the United States. In 2011, the Obama administration assassinated Anwar al-Awlaki, a US citizen, with a Predator drone strike in Yemen, then murdered his 16-year-old son, Abdulrahman al-Awlaki, in another drone strike two weeks later.

Google’s partnership in such nefarious operations threatens it not only with legal sanction around the world, but also with serious commercial repercussions. The company’s decision to proceed despite these dangers points to the increasingly vital role of military contracts in the business operations of the major technology giants.

The Defense Department spent at least $7.4 billion on artificial intelligence programs last year, and is expected to spend even more this year, with much of that amount flowing to corporations like Alphabet (Google), Amazon, and Nvidia, whose artificial intelligence capacities reportedly outstrip those of in-house Pentagon programs.

Over the past year, Google, Facebook and Twitter have all announced measures to censor the information their services present to users, promoting “authoritative” and “trusted” news outlets over “alternative” viewpoints, which include news outlets that expose and denounce US war crimes. Facebook, which of all the technology companies has been the most unabashed in its determination to censor its platform, has explicitly said it expects user engagement to drop as a result of its demotion of “viral” videos and promotion of “trusted” news sources, such as the New York Times. … 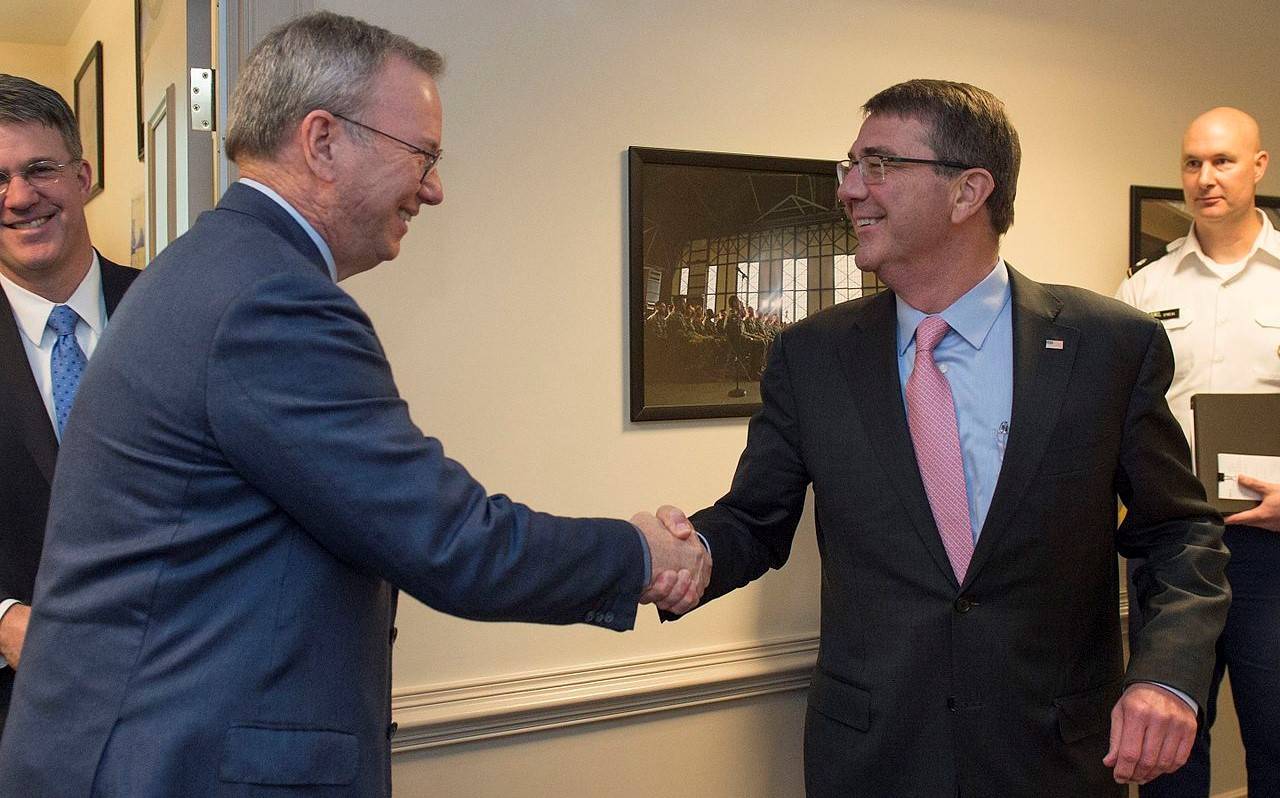 Google Is Helping the Pentagon Build AI for Drones

Google has partnered with the United States Department of Defense to help the agency develop artificial intelligence for analyzing drone footage, a move that set off a firestorm among employees of the technology giant when they learned of Google’s involvement. …

The project’s first assignment was to help the Pentagon efficiently process the deluge of video footage collected daily by its aerial drones—an amount of footage so vast that human analysts can’t keep up, according to Greg Allen, an adjunct fellow at the Center for a New American Security, who co-authored a lengthy July 2017 report on the military’s use of artificial intelligence. Although the Defense Department has poured resources into the development of advanced sensor technology to gather information during drone flights, it has lagged in creating analysis tools to comb through the data. …

Speaking to a crowd of military and industry technology experts, many from Silicon Valley, Cukor professed the US to be in the midst of AI arms race. “Many of you will have noted that Eric Schmidt is calling Google an AI company now, not a data company,” he said, although Cukor did not specifically cite Google as a Maven partner.

END_OF_DOCUMENT_TOKEN_TO_BE_REPLACED

I no longer recommend anyone supporting Alex, since he sold out. But this is significant. What if Google does take down Alex’s giant YouTube channel?
– –
https://www.youtube.com/watch?v=288uXvkNLMo
END_OF_DOCUMENT_TOKEN_TO_BE_REPLACED