Related: (video) Dr. Ryan Cole: “If you are in MIDLEVEL VITAMIN D range you cannot die from Covid” — MOST are D deficient — “No such thing as ‘flu and cold season,’ only low vitamin D season”

Part of the email Dr. Campbell shows in the video below:

Fauci couldn’t have gotten fast-track emergency authorization for the experimental vaccines if he had publicly admitted that 6,000 iu of D3 taken daily stops the main danger of Covid: the dreaded cytokine storm lung inflammation issue, which hospitals put people on ventilators for, upon which 90% died in New York — instead of giving them the fast acting form of vitamin D.

END_OF_DOCUMENT_TOKEN_TO_BE_REPLACED

The American Academy of Pediatrics is demanding that all children over the age of 2 wear face masks at schools and nurseries, even if they have been vaccinated. The demand goes further than that of the CDC, which has said that children and adults who work in schools who are fully vaccinated do not need to wear masks. According to the American Academy of Pediatrics website, Pfizer is their largest donor. Coincidence? –GEG

3:50 “He’s so aggravated he forgot about his position on this mic thing [to turn it on].”

6:45 “Now you see him with his hand up. So he’s physically showing he wants Rand Paul to stop.”

7:30 “There’s the freak out [Fauci points both index fingers at Rand, in front of his eyes as if he’s aiming two guns]. … He’s shaking, going up higher and higher, not only in his octave, but in his body.”

8:35 “He’s continuously looking towards the chairwoman. ‘Tell him to shut up; take my side. Silence him for me.’ … He’s constantly looking for that rescue.”

9:15 “Now he’s so stressed he’s got a rubber band that he’s playing with in his fingers.”

13:30 “Now he’s going back to playing with the rubber band. … So he’s still stressed from Rand Paul, and he continues to play with this rubber band.”

END_OF_DOCUMENT_TOKEN_TO_BE_REPLACED

Walach, an author of the study, told Retraction Watch, a website that reported on the aftermath of the study, that he does not agree with the expression of concern, saying “we have used and analyzed the data correctly, and not incorrectly. But that the data are less than optimal is clear to everyone and we said so in our paper. The purpose is to generate enough momentum for governments and researchers to finally create the good data that are long overdue.”

A “peer reviewed, scientific study showed that the COVID-19 vaccine causes two deaths for every three lives it saves.”

END_OF_DOCUMENT_TOKEN_TO_BE_REPLACED

It is estimated that more than 72% of public drinking water systems in America are fluoridated — thus, millions of pregnant women are currently being exposed to levels of fluoride that have the potential to lower their children’s IQ by at least four points and probably more.

END_OF_DOCUMENT_TOKEN_TO_BE_REPLACED

‘The government is not being transparent with us about what those risks are,’ said Dr. Robert Malone

As “Tucker Carlson Tonight” host Tucker Carlson noted, Dr. Robert Malone is “the single most qualified” expert on mRNA vaccines, but that the Big Tech companies are asserting themselves as more informed than him on the topic.

“A Norwegian study conducted of 100 nursing home residents who died after receiving Pfizer’s Corona shots. They found that at least ten of those deaths were likely caused by the vaccine. 10%,” said Carlson.

…he noted there is no substantive risk-benefit analysis being applied to the vaccines.

“That is one of my other objections, that we talk about these words risk-benefit analysis casually as if it is very deep science. It’s not. Normally at this stage, the CDC would have performed those risk-benefit analyses and they would be database and science-based. They are not right now,” said Malone.

Weinstein told the truth about Ivermectin for Covid.

Joe Rogan, on “The Joe Rogan Experience,” [June 22, 2021] interviews two of the world’s leading experts — Bret Weinstein and Dr. Pierre Kory — on ivermectin. They discuss how YouTube censored the DarkHorse Podcast for highlighting the benefits of ivermectin to treat COVID.

END_OF_DOCUMENT_TOKEN_TO_BE_REPLACED

1:21:10 “It’s all a matter of money, because if the Hydroxychloroquine and Ivermectin worked they could not have gotten the emergency approval for the vaccine.” – Dr. Ilona Farr on the Dan Fagan Show, 7/2/21

“This is not about health. It’s an agenda!” – Del Bigtree

Children and college students who get the jab: “Heart muscle fibers do not regenerate…. So you’re stuck with an unknown percentage of your heart muscle cells having died….” – Dr. Roger Hodkinson

The Advisory Committee on Immunization Practices (ACIP) at the CDC had a long-delayed meeting concerning the explosive numbers of young people experiencing myocarditis from the COVID-19 vaccine, and unfortunately their recommendations won’t surprise you.

The Highwire with Del Bigtree

BARTIROMO: This week, the Department of Health and Human Services reported it will spend more than $3 billion on developing and manufacturing antiviral treatments to treat COVID-19. … So, does this boil down to money then, Dr. Kory?

I mean, this drug made by Merck, ivermectin, is off-patent. They’re not making any money on it anymore. But now Fauci says he’s looking at a drug that’s going to be a patented drug made by Merck. Aren’t the underlying chemicals the same? So now they’re going to have that on patent, so that they can make a huge profit on it? END_OF_DOCUMENT_TOKEN_TO_BE_REPLACED

Sen. Ron Johnson, R-Wis., sounded off Monday on “The Ingraham Angle” after Google-owned YouTube handed down a suspension of his account because he posted a video that contained information about Hydroxychloroquine, a relatively cheap prescription medication used to fight malaria and lupus. END_OF_DOCUMENT_TOKEN_TO_BE_REPLACED

Here you go folks: 12 pages and 64 sources from various federal reporting sites and release from FOIA requests. Shows FDA and NIAID officials who are directly profiting off the vaccine that they approved. Some have direct ties to major pharmaceutical companies with several of them receiving money from these pharmaceutical companies while working for the government. Major conflict of interests and highly unethical.

This document shows how some of the board members who approved the vaccine are also investors. The lawsuit that is attached to this document and discovery is aimed at Fauci, CDC, NIH, DHHS, and NIAID

“Young people are not susceptible to Covid-19. If they acquire the virus, they usually have no symptoms, and they shrug it off very easily. So they’re not at risk. It’s a crazy thing then to vaccinate them with something that’s 50 times more likely to kill them than the virus itself.”

Big Pharma couldn’t have a treatment that worked in order to get fast-track approval for the experimental vaccines that they’re pushing down everyone’s throats right now, making $billions, paid for by the US government, including their propaganda incentives and promo commercials!

END_OF_DOCUMENT_TOKEN_TO_BE_REPLACED

THE FRAUDULENT DR FAUCI – PART I: THE AIDS RACKET

Dr Fauci: 40 Years Of Lies From AZT To Remdesivir

Here’s a bullet point summary of the article, although I highly recommend reading the entire article: END_OF_DOCUMENT_TOKEN_TO_BE_REPLACED

Anthony Fauci: 40 Years of Lies From AZT to Remdesivir

As the planet’s “Virus Tsar” since 1984, he has spread misinformation and ignored critical questions. The consequences could hardly be more fatal.

From: Anthony Fauci: 40 Years of Lies From AZT to Remdesivir

On February 19, 1988, Fauci appeared on the television program Good Morning America, as Lauritsen writes in his book. And he was asked why only one drug, AZT, had been made available. He replied:

The reason why only one drug has been made available — AZT — is because it’s the only drug that has been shown in scientifically controlled trials to be safe and effective.”

17:00  Dr. Duesberg: AIDS was caused by drug use and AZT itself (Fauci’s government funded cure), which destroys the immune system

22:15 At first: “AZT was designed to kill leukemia, but after animal testing, considered too toxic for any use”

33:20 Later, when approved for AIDS, animal trials were skipped, just like with experimental Covid vaxxes!

AIDS in the 1980s. END_OF_DOCUMENT_TOKEN_TO_BE_REPLACED

The fraud of the century revealed in detail for the first time (August 08, 2020)

END_OF_DOCUMENT_TOKEN_TO_BE_REPLACED 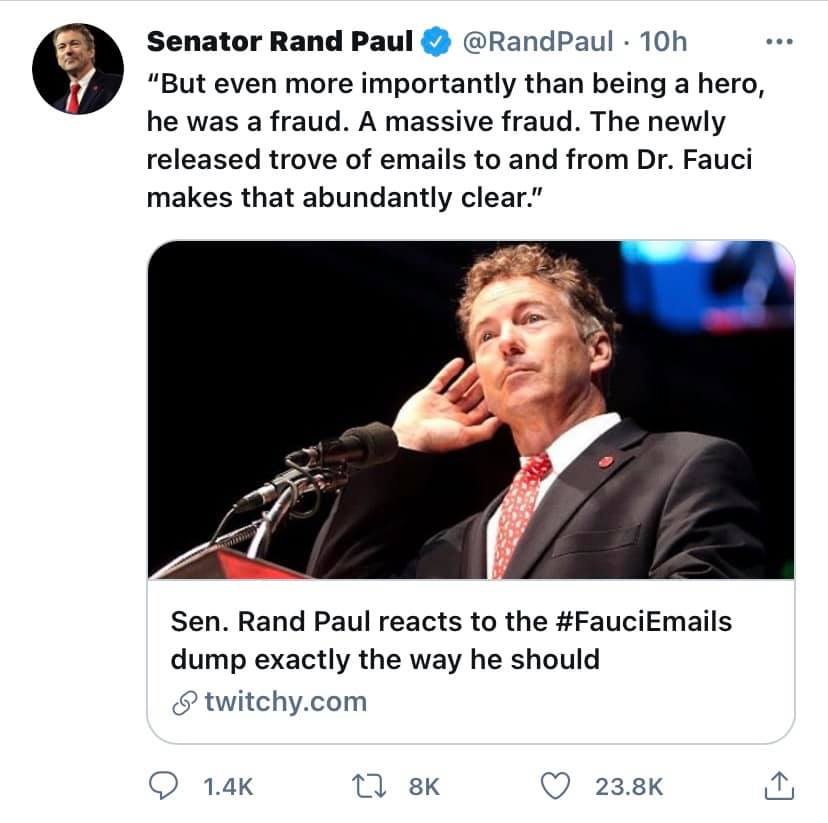 “Oh my god,” one Biden voter wrote to him back in March. “Is there anything I can do for you, besides being grateful?”

“Wash my feet with your tears,” Fauci may have responded. We can’t say that he did respond that way for certain. We don’t have his reply. We do know that in affluent neighborhoods throughout Washington D.C., you can still see signs that say “Thank you, Dr. Fauci.” What does that tell you?

It tells you that Tony Fauci is no longer a scientist, assuming he ever was. He’s a figure of religious veneration — Jesus for people who don’t believe in God.

‘We can only hope’ he is

The utter fraudulence of Tony Fauci is obvious now…. The emails prove Fauci lied about this under oath. END_OF_DOCUMENT_TOKEN_TO_BE_REPLACED