Adam Green and many others are getting videos censored for telling the truth about Talmudism, yet Google’s YouTube allows violent videos like these, no problem. Adam writes:

“My videos are censored by YouTube but this music video can show violent imagery and promote race war.”

@YouTube has allowed this Childish Gambino video to go viral & acquire half a BILLION views and @TeamYouTube terminated @HighImpactFlix channel for “violating” their guidelines? The hypocrisy is amazing. @Know_More_News @SGTreport please RT and help me get this message out there. pic.twitter.com/LhKfbkQt7s

END_OF_DOCUMENT_TOKEN_TO_BE_REPLACED

The pre-trib rapture is a demonic deception designed to keep Christians off-guard during the last days. No church ever taught it prior to the 1800s. The rapture happens at the second coming, after the tribulation.

– U.S. Ambassador Nikki Haley in a speech at Christians United for Israel (CUFI) where John Hagee presents to her the “Defender of Israel” award at minute-7:30

“We will stand with Israel because Israel’s cause is our cause. Israel’s values are our values. Israel’s fight is our fight.”

– U.S. Ambassador Nikki Haley in a speech (minute-34:25) at Christians United for Israel (CUFI) where John Hagee presents to her the “Defender of Israel” award (minute-4:20)

U.S. Ambassador to the U.N. Nikki Haley addressed the group Christians United for Israel (CUFI) first annual summit, which coincides with the 70th anniversary of Israel’s independence. Ambassador Haley. was introduced and presented with an award by Pastor John Hagee, CUFI founder and national chair.

END_OF_DOCUMENT_TOKEN_TO_BE_REPLACED

I used to work a few hundred yards from here.
At the very end of this short video, UPS freighter tails can be seen. Our NW Airlines cargo facility, where we did all the transloads, used to be between UPS and the trees showing behind the tails.
– –
From: ADN, 7/28/18
Rest of the story and video HERE

At first, James Batman thought a black, furry dog had sprinted by him at Ted Stevens Anchorage International Airport, near where FedEx parks its cargo planes.

“Then I looked back again and saw it had no tail….

The bear had gotten into the area by burrowing under a nearby fence, said Trudy Wassel, division operations manager at airport. Airport staff had since repaired the area.

“We take it very seriously,” she said.

The airport borders Point Woronzof and Kincaid Park, areas where it’s not uncommon to see black bears, said Ken Marsh, a spokesman at the Alaska Department of Fish and Game.

“..I just go through the whole ‘Hollocaust’ with the same type of forensic, open mind that I hope I have in my normal way of looking into these things, and I tell you, the official story doesn’t match up at all, at all, not even anywhere near what we’re been told. It just does not match up. So the ‘Holocaust’ is one thing that is interesting to look into.”

Slam-dunk even back then. Clearly Emotions vs Facts.
Summary:

With its 24-hour 50,000-watt signal, and enormous listening audience in the Los Angeles metropolitan area, KFI is easily the biggest talk-radio station on the west coast. And Ted O’Keefe and Mark Weber were scheduled for a live in-studio debate with Aaron Breitbart, senior researcher from the Los Angeles-based Simon Wiesenthal Center. Breitbart chickened out at the last minute, so for over 2 hours — from 7:30 PM until 10:00 PM — on the evening of December 17, 1990, roughly a million KFI listeners from as far away as Oregon and Texas got an unforgettable dose of history in accord with the facts. This is probably the most effective case for Holocaust revisionism ever carried over the airwaves [because TalmudVision outlaws the ‘Holocaust’ truth – editor]. Mark Weber and Ted O’Keefe :: 1990 – KFI AM640 Los Angeles

Witness Rudolf Vrba was internationally known. …he dictated a report about Auschwitz and Birkenau, and on their crematories and “gas chambers.” With help from Jewish organizations in Slovakia, Hungary and Switzerland, his report reached Washington, where it served as the basis for the U.S. Government’s famous “War Refugee Board Report,” published in November 1944.

…published his autobiography under the title of I Cannot Forgive. This book published in 1964, was actually written by Alan Bestic…. He has been featured in various films about Auschwitz, particularly Shoah by Claude Lanzmann. Everything went well for him until the day at the Zündel trial in 1985 when he was cross-examined mercilessly. He was then shown to be an impostor. It was revealed that he had completely made up the number and location of the “gas chambers” and the crematories in his famous 1944 report. His 1964 book opened with a purported January 1943 visit by Himmler to Birkenau to inaugurate a new crematorium with “gas chamber.” Actually, the last visit by Himmler to Auschwitz took place in July of 1942, and in January 1943 the first of the new crematories was still far from finished. Thanks, apparently, to some special gift of memory (that he called “special mnemonic principles” or “special mnemonical method”) and to a real talent for being everywhere at once, Vrba had calculated that in the space of 25 months (April 1942 to April 1944) the Germans had “gassed” 1,765,000 Jews at Birkenau alone, including 150,000 Jews from France. But in 1978, Serge Klarsfeld, in his Memorial to the Deportation of the Jews from France, had been forced to conclude that, for the entire length of the war, the Germans had deported a total of 75,721 Jews from France to all their concentration camps. The gravest aspect of this is that the figure of 1,765,000 Jews “gassed” at Birkenau had also been used in a document (L-022) at the main Nuremberg trial. Attacked on all sides by Zündel’s lawyer, the impostor had no other recourse than to invoke, in Latin, the “licentia poetarum,” or “poetic license,” in other words, the right to engage in fiction.

END_OF_DOCUMENT_TOKEN_TO_BE_REPLACED

Aluminum melts at 1,221 degrees Fahrenheit while wildfires can burn up to to 1,500 degrees fahrenheit, more than enough to lay waste to your rims, a reasonably common wildfire casualty.

My Notes:
9:40 “Once you start deciding what the level of acceptability is the whole thing collapses.”
GREAT point at 19:00!
20:05 “The beginning of the mark [of the Beast]”
25:50 Do NOT support DISINFOWARS. I must disagree with Nick here. Alex is doing more harm than good, sadly.
It also sounds like Nick thinks the one-world government is a good thing, but won’t happen for a couple of hundred years from now? I’ve never heard him say this before.
Russia and China are getting ready to take US out, and may actually do it in the next decade.

END_OF_DOCUMENT_TOKEN_TO_BE_REPLACED

Steven Spielberg is director and co-producer of ‘Schindler’s List,’ which shows false history and provocative nudity to children in public schools.
Isaac also mentions Steven Colbert, who nightly destroys America on ‘The Late Show.’
37:50 “I hope I’m inspiring other people to be bold and be brave.”
Isaac Kappy’s film appearances at IMDb
Related: Hollywood Actor-Writer-Producer, Isaac Kappy: “It’s Worse Than You Think, Pedos Are REAL”
– –

Nothing is more powerful than a tribe member speaking out against his own tribe when morals are being violated and lies and deception are being used as means to legitimate tyranny and poisoning of the minds. The inquisition of brave people like Monika and Alfred Schaefer, Alison Chabloz, Ursula Haverbeck and many more deserve the light of public attention. Hopefully more jews (and gentiles) will follow the brave example that Henry Herskovitz gives by speaking out against the disgusting treatment of people who dare to speak out or ask questions regarding the mother of all lies, the Holocaust. Check out https://localwiki.org/ann-arbor/Henry…

UPDATE: Hoffman has now written a book entirely on this subject:

Thanks to Jim for this link!

I subscribe to Michael Hoffman’s publication Revisionist History, and have now read his article, “Hitler Never Had a Snowball’s Chance in Hell of Conquering Soviet Russia” in his latest edition #97  in which he strongly states that Hitler’s recklessness really was based on a delusional, mind-over-matter mindset which ended up destroying Germany, because there were no checks and balances.

In this post, Michael responds to comments from readers, conveying his perceptions, conclusions and suggestions. Thank you, Michael!
Emphasis is mine. END_OF_DOCUMENT_TOKEN_TO_BE_REPLACED 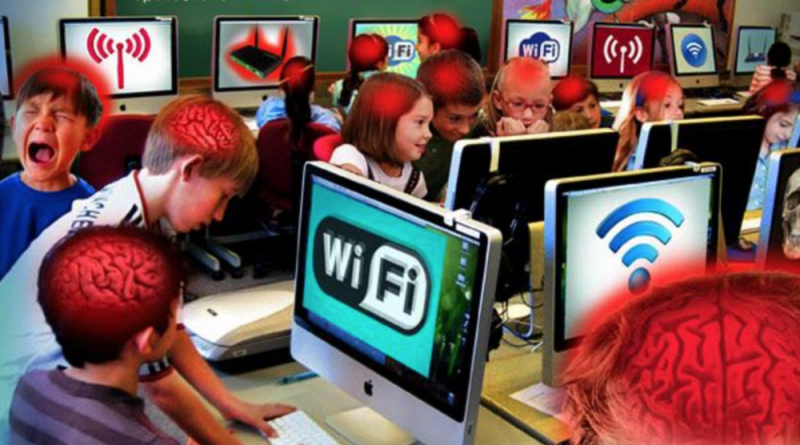 June 6, 2018
By B.N. Frank
No “safe” level of cell phone and wireless WiFi radiation exposure has been scientifically determined for children or pregnant women.  Despite this, many millions of American taxpayer dollars have been spent making public schools “high tech” while tech inventors have been limiting their own kids’ use and sending them to private “low tech” schools.
If your children are having any type of behavioral, emotional, mental or physical health issues, lab testing may determine if some or all of this is because of “Microwave Sickness” aka “ElectroSensitivity” (ES).  There are so many symptoms that this it’s often misdiagnosed.
In 2010, experts determined that up to 1/3 of us are sensitive to some degree and 3% are clincially hypersensitive to exposure to cell phone and wireless WiFi radiation and other sources of Electrical Pollution (aka Electrosmog).
Exposure can also worsen pre-existing conditions even if it didn’t cause them. END_OF_DOCUMENT_TOKEN_TO_BE_REPLACED

Mr. Bill Whatcott, a Christian activist from Alberta, has been charged by Toronto Police with “public incitement of hatred”. He surrendered peaceably June 22nd in Calgary after police had taken the unusual step of issuing a Canada-wide warrant for his arrest.

The charges against Mr. Whatcott are based on a complaint filed in 2016 related to his presence at the 2016 Gay Pride parade in Toronto. At the parade, he and several friends handed out Gospel literature with warnings about the spiritual and physical dangers of practising homosexuality.

Mr. Whatcott’s courageous group was able to distribute over 3,000 pieces of literature by disguising themselves as “gay zombies” and marching in the parade. They risked their necks and endured the hideous sights of this celebration of debauchery in order to reach men and women with life-saving, soul-saving truth.

You can view the literature Mr. Whatcott handed out, as well as photos from the parade, at the following links. WARNING: This content is very disturbing and graphic! View Tract – View Photos from Event.

Two pro-LGBT individuals tried to sue Mr. Whatcott shortly after the parade, claiming $104 million in damages for defamation against the LGBT community. However, the judge threw out the lawsuit.

It is extremely alarming that the police have now chosen to intervene and label Mr. Whatcott’s actions as a “hate crime”. This appears to be a case of real anti-Christian persecution, trampling to death our freedom of religion and freedom of speech in Canada.

Mr. Whatcott did not commit a hate crime. He did not call on people to “hate” anyone. Rather, out of love, he issued a daring Gospel call on LGBT folks to turn from their sins, repent, and be saved.

At the bottom of his literature to LGBT individuals, he wrote: “we also want to let you know there is a God who loves you, and who is real, and who has made a way for you to come to Him.” …

END_OF_DOCUMENT_TOKEN_TO_BE_REPLACED

“..Sheldon Adelson, Paul Singer and Brendon Marcus — it’s three rich Jews control the foreign policy of the United States of America, and we’re in a situation where we can’t even say the word ‘Jew.’ … We’re hoping to achieve something here when we can’t even name the people who are doing what we are objecting to” [without being labelled ‘anti-Semitic’].
– E. Michael Jones, transcribed by me from this interview