Disclaimer: Catholicism is not real Christianity, which differs from what is said here.
– –
16:00 Jesus’ disciples were in the upper room in fear of the Jews
39:50 “We do have to love them. Why? Because they’re our enemies. They’re enemies of the entire human race. And Christians are taught to love their enemies.”
56:00 1,300 political prisoners in Germany right now

Fontova is excellent on his family’s country’s history, but believes the false myths about Hitler and WWII Germany.
– –

END_OF_DOCUMENT_TOKEN_TO_BE_REPLACED

Alison writes:
“In short, my Songs of the Shoah were a direct result of the years of provocation, stalking and harassment of me, mainly by Silverman and Applebaum. I am far from being their only target. The diabolical pair have been using the same baiting and entrapment tactics against innocent individuals ever since CAA was founded in 2014.”

The Earth Is Round And Here's The Proof

END_OF_DOCUMENT_TOKEN_TO_BE_REPLACED

Incredibly brave, Alison Chabloz has tried to wake the people up in her unique, musical way to the falsehoods of the ‘Holocaust’ story, so the truth can be known, and so we can move forward without this ‘Holocaust’ guilt trip hamstringing the people so they’re blinded from seeing how the Talmudists are getting away with destroying society so the NWO can now likely happen during our lifetimes.
This is a precedent setting case that effectively could make England among the approximately 20 nations that imprison people for publicly telling the truth about this one historical fabrication from which the Talmudists have gotten $billions in reparations and enough sympathy to basically do anything they want to anyone.
What Alison sung was based on facts now proven:

Germar Rudolf ‘HOLOCAUST’ Q&A: WHAT ABOUT THOSE PICTURES of Mountains of Dead Bodies in the Concentration Camps? — ALL photographs of heaps of corpses were taken in Western camps around the end of the war, where historians now agree *no mass murders* took place. There are NO such photographs taken at the camps in which mass murder is *alleged* to have occurred • Toward the end of the war, Himmler ordered the evacuation of the eastern camps as the Red Army approached, which led to hopeless overcrowding in the western camps. By that time, ALLIED BOMBING had completely destroyed the German infrastructure, making it impossible to supply the camps with food, medicines, and sanitation supplies

Germar Rudolf ‘HOLOCAUST’ Q&A: How about the TESTIMONIES BY SURVIVORS and CONFESSIONS BY PERPETRATORS? — PRESSURE – almost everybody in the world expects survivors to “remember”. That pressure is huge, in particular for Jewish survivors, who are considered traitors if they don’t remember the “right” things END_OF_DOCUMENT_TOKEN_TO_BE_REPLACED 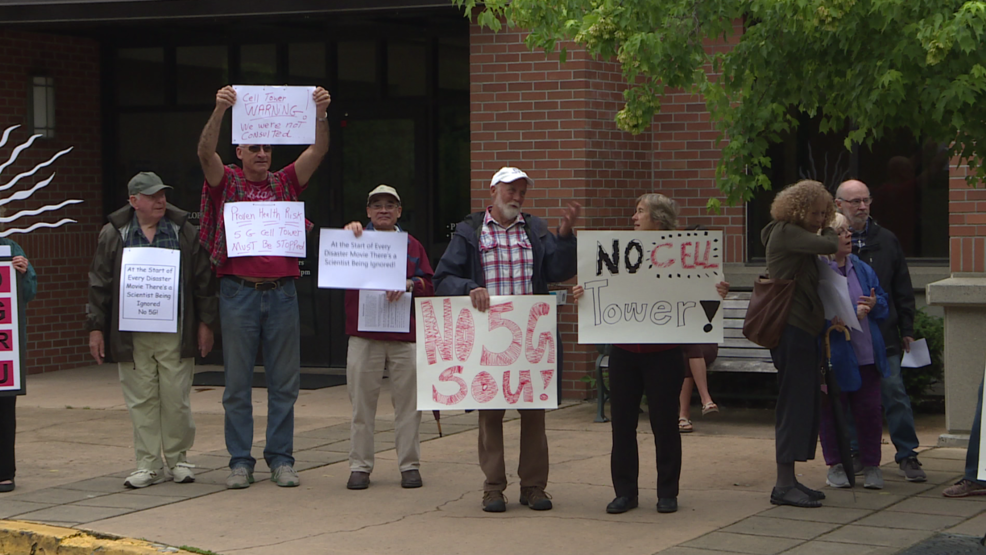 KTVL/Riche Garza
Ashalnd, Ore. —
Protesters gathered today outside city offices in Ashland demanding the stop of a Verizon 5-g tower installation.
The tower is to be added to the roof of the science building in Southern Oregon University but the protesters are worried about the strong electronic impulses from the tower.
The protesters believe it has a direct correlation with neurological health issues.
More

Unlike the “4th Generation” (4G) technology currently in use, which relies on huge 90-foot cell towers with about a dozen antenna ports on each, the 5G system uses “small cell” facilities or bases, each with about 100 antenna ports each.2 Expected to be 10 to 100 times faster than 4G technology and capable of supporting at least 100 billion devices,3 5G relies primarily on the bandwidth of the millimeter wave (MMW), which is between 30GHz and 300GHz, according to EMF coach and author Lloyd Burrell.4

“MMWs … do not travel well through buildings and they tend to be absorbed by rain and plants. This interferes with the signal. Added to this, high frequency waves like MMWs also have much shorter wavelengths that can’t travel far,” he says.

“To counter this problem 5G will utilize smaller cell stations (and the technology of beamforming) that’ll scramble/unscramble and redirect packets of data on a no-interference path back to us. This could mean wireless antennas on every lamp post, utility pole, home and business throughout entire neighborhoods, towns and cities,” Burrell explains,5 and herein lies one of its greatest potential problems — and threats to public health. …

In May 2011, the International Agency for Research on Cancer (IARC), the cancer research arm of the World Health Organization (WHO), declared radiofrequency (RF) radiation from cellphones a Group 2B “possible carcinogen,” meaning a “possible cancer-causing agent,” based on the available research.
The $25 million research conducted by the National Toxicology Program (NTP) — an interagency research program started by the U.S. Department of Health and Human Services (HHS) in 1978 and now housed at the National Institute of Environmental Health Sciences (NIEHS) — included two separate studies (one on mice and one on rats) that also revealed exposure to the type of radiation emitted by 2G and 3G cellphones could cause heart tumors, DNA damage and tumors in the brain, prostate, liver and pancreas.13 With 5G technology, additional concerns are raised.
According to research by Dr. Yael Stein of Hebrew University of Jerusalem and colleagues, computer simulations have revealed that sweat glands concentrate MMWs in human skin, which may be sensed as heat waves or physical pain to humans. In a 2016 letter to the Federal Communications Commission (FCC) in opposition of 5G technology, Stein wrote:14

“If these devices fill the public space they will affect everyone, including the more susceptible members of the public: babies, pregnant women, the elderly, the sick and electro hypersensitive individuals.

Potentially, if G5 WI FI is spread in the public domain we may expect more of the health effects currently seen with RF/ microwave frequencies including many more cases of hypersensitivity (EHS), as well as many new complaints of physical pain and a yet unknown variety of neurologic disturbances. It will be possible to show a causal relationship between G5 technology and these specific health effects. The affected individuals may be eligible for compensation.”

In addition, Burrell compiled a host of other research that shows the proliferation of 5G for the sake of faster internet could be a public health disaster. For instance, the frequencies utilized by 5G have been linked to:15

END_OF_DOCUMENT_TOKEN_TO_BE_REPLACED

David Hogg and the gun control lobby have found a new ally in their bid to undermine the Second Amendment. A major airline likely wasn’t expecting to have their secret support exposed, but thanks to David Hogg’s bragging, we all know the truth.
Hogg was traveling home from New York City yesterday, where he attended The Common Good Forum and Spirit Awards, where he was honored by the group for his work to ban guns, under the guise of stopping gun violence.
A constant tweeter, Hogg takes every opportunity to grandstand and lecture America on gun violence. He mentioned that he had to get back to Florida to stage “die ins” at local Publix grocery stores on Friday (because they support the National Rifle Association), and tweeted from his plane. When he tweeted from his Delta flight, he had to brag about the airline’s support for his cause, and exposing that the airline plays favorites with their charitable causes.
“Shout out to @Delta thank you for donating 4 planes to get kids from Parkland to DC for the March, renouncing your previous relationship with the NRA and lastly for having outlets on you planes. You are a perfect example of how corporate America can stand with us. THANK YOU,” Hogg tweeted from the plane.
Most people were aware that Delta had previously cut ties with the NRA, but few were aware that the airline donated the use of four planes to get kids to the “March for Our Lives.” It’s not the kind of gesture Delta makes often, but they seemed committed to supporting the March’s gun control agenda.
Entire Article

Internationally acknowledged experts in the field of RF/MW radiation research have shown that RF/MW transmissions of the type used in digital cellular antennas and phones can have critical effects on cell cultures, animals, and people in laboratories and have also found epidemiological evidence (studies of communities, not in the laboratory) of serious health effects at “non-thermal levels,” where the intensity of the RF/MW radiation was too low to cause heating. They have found:

END_OF_DOCUMENT_TOKEN_TO_BE_REPLACED

“You have to understand, most of these people, are not ready to be unplugged. And many of them are so injured, so hopelessly dependent on the system, that they will that they will fight to protect it.”
~ Morpheus

Was Tommy Robinson’s appearance and arrest outside a court in Huddersfield last week a set up?
My response:

Very possible and likely! I’ve been posting comments under posts about this guy: “Don’t forget what they just did to Alison Chabloz.”

Last Friday, same day as my guilty verdict was pronounced, founder of the EDL (English Defence League) Tommy Robinson was arrested outside a court in Huddersfield, reportedly for contempt of court. END_OF_DOCUMENT_TOKEN_TO_BE_REPLACED

END_OF_DOCUMENT_TOKEN_TO_BE_REPLACED

Important. Brendon says truthers should drop the ‘Holocaust’ though, which I completely disagree. Exposing the ‘Holocaust’ is the biggest way to disrobe the lying, power-over-others, NWO Talmudists.
– –
https://www.youtube.com/watch?v=Juy9DVzZ4Qo
END_OF_DOCUMENT_TOKEN_TO_BE_REPLACED