This is Perloff’s first appearance in a number of months.

1:16:30 It’s backfiring on them. They pushed down the accelerator too fast. …instead of just boiling the frog, like they usually do.”

1:34:30 Perloff: “You can really see the Satanic nature of the hierarchy that runs this country from the top. … This is a battle of good verses evil.”
Vernandas: “I’m not a religious person.”

END_OF_DOCUMENT_TOKEN_TO_BE_REPLACED

“If the founding fathers were truly Christian they would have rendered unto Caesar that minimal 3 cent custom duty on tea, instead of going to war and causing bloodshed and the death of tens of thousands of people.” – James Perloff

I was Deanna Spingola’s guest live on her RBN radio show. Main topic: Who really wrote the Declaration of Independence? We looked at some of the darker aspects of America’s origins and history. Archived as Hour 1 and Hour 2.

Hour 2, minute-4:30 Truth about the Revolutionary War. Britain was not enslaving American colonists with taxation. END_OF_DOCUMENT_TOKEN_TO_BE_REPLACED

Related: (video) James Perloff: Who Fired the Shots Heard Round the World? – REVOLUTIONARY WAR a FREEMASONRY FALSE FLAG • There were NO ONEROUS TAXES laid on Americans, nor other legitimate reasons to revolt • The BREWERS of revolution: SAMUEL ADAMS was a Dick Cheny-like warmonger; Paul Revere’s role; HIDDEN GUNMEN fired the first shots; THOMAS *PAYNE* (an atheist) wrote the Declaration of Independence • The 50 year PLEDGE TO SECRECY

The American Revolution, Part I: The Secrets Buried at Lexington Green — Who Really Fired “The Shot Heard Round The World”?

(Note: For those who would prefer to read this post in hard copy, it is Chapter Thirteen of my book Thirteen Pieces of the Jigsaw.)

FOREWORD: I do not expect this two-part article to be very popular among American patriots, many of whom are my dear friends. They are among the core of America’s best citizens; men and women who fight to protect constitutional liberties from the police state, and to preserve U.S. national sovereignty from the tyranny of world government.

The following article raises questions about the American Revolution, which many patriots regard as the foundation of their beliefs. It can be dangerous to shake a good man’s foundation – even if the foundation is flawed – because it might cause him to question his worldview, and weaken his resolve. However, no historical event should be held so sacred as to be immune to examination. Our country is in too much trouble to make truth secondary.

Many patriots say the solution to our problems is to return to the “principles of the Founding Fathers.” I strongly agree with this view in part; I certainly believe in limited government and the Bill of Rights, and that these fundamental doctrines have been eroded to the point of national peril. However, I also believe that much of the trouble actually traces to America’s founding. Despite ubiquitous descriptions of the Founding Fathers as Christians, revolutions are – with rare exceptions – contrary to Biblical doctrine. In Part II, we will explore this issue, and the revolution itself in depth. Right now, we focus on the flashpoint that ignited the war between Britain and her American colonies. END_OF_DOCUMENT_TOKEN_TO_BE_REPLACED

The American Revolution, Part II: Who Wrote the Declaration of Independence? — And Was the Revolution a “Christian” War? 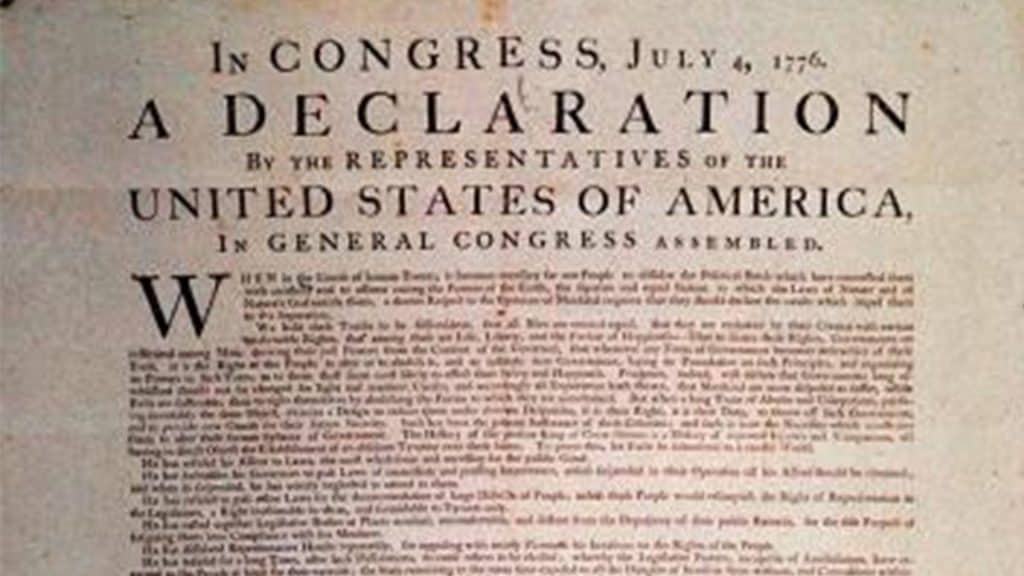 A highly abbreviated version of this article appears on Dr. Henry Makow’s website. (The use of the word “Satanist” in the title of the condensed version was the editor’s choice.)

I consider it prudent to begin this post by duplicating the first paragraphs of the foreword to Part I:

FOREWORD: I do not expect this two-part article to be very popular among American patriots, many of whom are my dear friends. They are among the core of America’s best citizens; men and women who fight to protect constitutional liberties from the police state, and to preserve U.S. national sovereignty from the tyranny of world government.

The following article raises questions about the American Revolution, which many patriots regard as the foundation of their beliefs. It can be dangerous to shake a good man’s foundation – even if the foundation is flawed – because it might cause him to question his worldview, and weaken his resolve. However, no historical event should be held so sacred as to be immune to examination. Our country is in too much trouble to make truth secondary. END_OF_DOCUMENT_TOKEN_TO_BE_REPLACED

James Perloff writes on his site:

January 27. I was the latest video guest of Rachael McIntosh (who describes her defense industry experiences in novels) on her revived show Shadow Citizen. We discussed Biden, COVID, censorship, writing, 5G, and false flags, including 9/11.

END_OF_DOCUMENT_TOKEN_TO_BE_REPLACED

James Perloff is my favorite real-historian — dedicated to telling the truth!

As we approach the final days of 2020, Spiro is joined by author, journalist and recently retired registered nurse, James Perloff, to reflect on what is widely considered to be the wildest and worst year perhaps in our lifetimes.

The media and the governments around the world would like us to believe this is all by chance and we must blindly follow their mandates and restrictions in order to mitigate this crisis.

Spiro and Perloff delve beyond the surface of this crisis to explore potential motives behind what appears to be a pre planned agenda attached to the current crisis in order to facilitate the most significant transition in human history.

James Perloff shares information from his new book titled ‘COVID-19 and the Agendas to Come, Red-Pilled’ which reveals what the social engineers have in store for the future of humanity.

END_OF_DOCUMENT_TOKEN_TO_BE_REPLACED

Excellent overview! I would add: Vitamin C+D is pennies, treats covid, and is ignored by Big Pharma. Zinc was mentioned, which they also hate. Regarding 5G, James didn’t mention that Iran didn’t have 5G but got hit hard with covid. Also, Wuhan residents got a SARS vaccination in 2019. No one is mentioning the toxic fumes breathed by New Yorkers, having impaired many people’s respiratory systems, perhaps making NYC’s numbers worse.

END_OF_DOCUMENT_TOKEN_TO_BE_REPLACED

“Normally with infectious diseases, you quarantine the infected, not the healthy.”

“This is the first time that Easter was cancelled.”

“We’re seeing the formation of a worldwide police state.”

19:50 “Professor Knut Wittkowski… says Dr. Fauci is doing the exact opposite of what should be done…. Having everyone locked in their homes, he says is going prolong this virus, and we’ll probably see it recur in the fall.”

Lacking a transcript, I’m going to paraphrase verbal remarks from Professor Knut Wittkowski, for 20 years head of Rockefeller University’s Department of Biostatistics, Epidemiology, and Research Design, and 35 years an epidemiologist. He says social distancing and lockdown are the worst ways to deal with an airborne respiratory virus. Yes, he says, keep the elderly and immunocompromised people safe, but there should be no isolation for the rest of the population. He says the lockdown prolongs the virus by preventing herd immunity, and may result in a new outbreak later on. As the interview lasts 41 minutes, I’m not embedding it, but it may be watched here. (from COVID-19 Red-Pilled)

47:30 “One way that I know Bill Gates is not sincere in improving people’s health: when you ever seem him talk publicly, he never talks about getting exercise or vitamin C, or vitamin D, or improving your immune system. He only talks about the VACCINES!

END_OF_DOCUMENT_TOKEN_TO_BE_REPLACED

19:30 Jesus won’t rule from Jerusalem, like many evangelicals expect

23:30 The millennial reign? Only Revelation 20 mentions it, whereas 2 Pet. 3:10, 2 Th. 1:7-10 and Mt. 24 [parts already fulfilled] indicate the destruction of Earth instead. Revelation is known for being figurative.

I only listened to the James Perloff segment, which is excellent!

END_OF_DOCUMENT_TOKEN_TO_BE_REPLACED

The Antedote’s hosts are Jeremy Rothe Kushel and Greg McCarron.
33:30 “..Iran the final target…. Certainly, an objective of the Greater Israel Plan is to destabilize Iran. And once that happens, I feel that the Rothschilds and Benjamin Netanyahu would have no further use for America, and they would happily see the dollar collapse and America collapse.” – James Perloff

END_OF_DOCUMENT_TOKEN_TO_BE_REPLACED

The Talmudists played the ‘Holocaust’ card to break the 31-year decency code.
– –

James Perloff is my favorite historian. I currently have 70 posts at: Category: James Perloff – Real-Historian!!!
– –

END_OF_DOCUMENT_TOKEN_TO_BE_REPLACED

41:00 Both Hagmanns are waking up to Talmudic Israel’s evil doings!
30:15 “We should be opposing evil, and we should be trying to fulfill God’s will in our lives. And that means we should be peacemakers here on earth. And we should certainly not be following an agenda that is set by people who are without question Luciferians.” – James Perloff
52:30 “It’s not coincidental. There is definitely a correlation between how well we do and how well we obey God.” – James Perloff

END_OF_DOCUMENT_TOKEN_TO_BE_REPLACED

39 “The ‘White Helmets’ are al-qaeda,” whose ‘gas attack’ information we rely on.
1:28:00 How James was impacted by vaccinations himself as a child
1:38:00 Makes his own memes with PowerPoint
– –
James Perloff writes on his website:

April 21. I was Eric Gajewski’s guest on TCK LIVE, coming in after the first half hour. We mostly discussed Syria and Trump, took calls and also touched on the Vietnam War, vaccines, and Christianity’s relationship to  the Truth Movement. The commendable Charlotte Iserbyt was the guest after me.

END_OF_DOCUMENT_TOKEN_TO_BE_REPLACED

From: The New American

Holodomor: The Secret Holocaust in Ukraine

When Ukraine resisted Soviet attempts at collectivization in the 1920s and ’30s, the Soviet Union under Stalin used labor camps, executions, and starvation (Holodomor) to kill millions of Ukrainians.

In 1933, the recently elected administration of Franklin D. Roosevelt granted official U.S. recognition to the Soviet Union for the first time. Especially repugnant was that this recognition was granted even though Soviet dictator Joseph Stalin had just concluded a campaign of genocide against Ukraine that left over 10 million dead. This atrocity was known to the Roosevelt administration, but not to the American people at large, thanks to suppression of the story by the Western press — as we shall show. END_OF_DOCUMENT_TOKEN_TO_BE_REPLACED

From: The New American

Although the mass media present China today as “progressive,” especially after the 2008 Olympics fanfare, it remains among the world’s cruelest regimes.

The term “Red China” is not anachronistic. Though certainly less oppressive than during the Cultural Revolution, when it executed millions, China is still governed by a single regime, the Communist Party, which requires members to be atheists. It imprisons dissidents without due process, oppresses Tibet, and enforces a policy, backed by compulsory abortion, restricting most families to one child. (Since Chinese traditionally prefer male offspring, this has led to disproportionate abortion — even infanticide — of female babies, creating an artificial majority of males in China.) The government directly controls most media, blocking criticisms of itself on the Internet.

Perhaps worst is suppression of religious freedom. Christian churches, though permitted, must submit to government control and censorship — either as part of the Three-Self Patriotic Movement or Chinese Patriotic Catholic Association. Independent house churches, comprising some 90 percent of China’s Christians, face persecution. The Voice of the Martyrs reports:

The human rights record in China is one of the worst in the world. Its system of “re-education through labor” detains hundreds of thousands each year in work camps without even a court hearing…. The house church movement (unregistered churches) endures unimaginable persecution, yet stands on its commitment to preach the gospel, no matter the cost. China continued its crackdown against Christians and missionaries in 2008, as they sought to purge the country of religion before hosting the Olympic games…. Church property and Bibles were confiscated. Christians were harassed, questioned, arrested and imprisoned. Christians in prisons are routinely beaten and abused.

What surprises many Americans: the regime ruling China was largely put there by the United States.

January 27. I was interviewed by Keith Knight on “Don’t Tread on Anyone.” We discussed the New World Order at large: conspiracy, false flags, Pearl Harbor, whistleblowers, Israel’s connection to 9/11, and much more. Keith, a relatively new face to alternative media, is a very well-informed young man.

END_OF_DOCUMENT_TOKEN_TO_BE_REPLACED

All of James Perloff’s political satire memes: THE WORLD ACCORDING TO PERLOFF’S TWITTER MEMES
– –

“Your mission—should you choose to accept it, Jim—is to help Mossad
destroy the World Trade Center and blame it on Muslim patsies.”